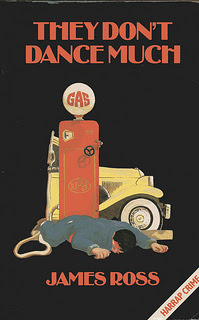 Falling somewhere between the hard-as-nails writing of James M. Cain and the early stories of Ernest Hemingway, James Ross’s novel was for sheer brutality and frankness of language considerably ahead of his reading public’s taste for realism untinged with sentiment or profundity.

The setting of They Don’t Dance Much is a roadhouse on the outskirts of a North Carolina town on the border with South Carolina, complete with dance floor, res­taurant, gambling room, and cabins rented by the hour. In the events described, Smut Milligan, the proprietor, seeks money to keep operating and commits a brutal murder.

According to the list of books I've read over on Goodreads I read this before 2010 (with a 3/5 rating) which was when I started logging what I was reading. My pre-2010 read list was compiled from memory. I kind of expected bits of this to come back to me as I re-read it but I never got the sense of recovering old ground. False memory maybe.

A slight post Depression era tale set maybe a year or two before it was written (1940) and in essence it's a story of two men. Times are still tight, Jackson McDonald is in debt and is about to lose his family land due to unpaid taxes. Smut Mulligan runs a filling station and also sells illegally produced alcohol. Mulligan has big plans to turn his station into a big roadhouse and money earner. Smut offers Jack a job as a cashier.

The roadhouse is a fair success in a relatively short space of time, but Mulligan has borrowed heavily to get things off the ground. The income coming in doesn't allow for enough to easily pay the bank notes and whoever else he owes. Solution = murder.

One of the patrons of the bar, rumour has it. Has a stash buried somewhere on his land. Smut enlists Jack in his plan, without actually telling McDonald what he's up to. Jack is basically duped. Bert Ford gets tortured, killed and disposed of - eventually - and not without a few close shaves and the pair dig up a sum of money. Not quite the expected amount but in the region of about $12k. Mulligan, the lead takes charge of the money, promising Jack his share when things cool down.

Moving on a bit. The sheriff is due for re-election and is feeling the heat over the investigation into the disappearance and suspected murder of Ford. Evidence at the scene of the confrontation between the three, suggests Ford met a bad end, with robbery the motive. He needs a body in the jail to keep his job. Jack keeps getting blown off by Smut, who he suspects is dipping into the proceeds to keep the wolves at bay and the roadhouse afloat. His share of the money is always coming on the never never.

The book develops into a battle of wills between Smut and Jack. Their initial partnership, albeit a lop-sided one developing into a relationship of real enmity and distrust. Something has to give.

On reflection, I enjoyed this one more than the last time I read it (assuming I did read it) and probably have a higher regard for it, a week or two one from finishing it than I actually had at the time I was reading it. At the time I kind of felt it was a bit slow. We more or less live through every day in the lead-up to the dramatic event and the aftermath of it. A bit of distance, and maybe the pace is perfect as Ross gradually creeps the tension into the narrative, with Mulligan and Jack McDonald circling each other like a couple of sharks, trying to sense a weakness and hone an advantage.

There's a lot of small town detail of the period, which shines through in the characters. There's the successful businessman Charles Fisher with the trophy wife Lola; there's Astor LeGrand, another of influence and power with a eye for an opportunity to further his interests, hopefully at the expense of Mulligan if he can't repay his debts. Lola, herself is flighty and bored with her husband and playing a dangerous game with Mulligan. And there's the contrast with the have-nots; Smut's staff working for food, board and lodgings and whatever change he throws their way. His black handyman and booze brewer, Catfish, always bumming smokes and rides and sips from the bottle. 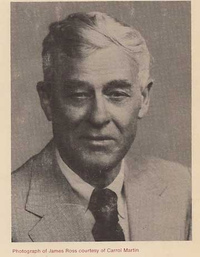 A few of our lesser characters, come to play an important part in the eventual climax of the book.

They Don't Dance Much was the only novel James Ross ever had published.

More thoughts on this one can be found over at The Dark Time.