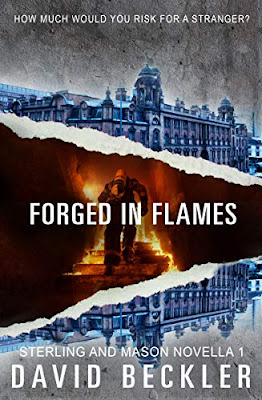 Ex-Royal Marine and Firefighter, Adam Sterling, rescues Kim from an inferno. She reminds him of someone in his past.

Kim is being targeted by a violent arsonist, but why? She’s in witness protection, but even Eddy Arkwright, the policeman investigating her attack, can’t find out why.

Adam feels compelled to help her, but can he keep her out of the clutches of the people hunting her?

He has to use all his abilities as a firefighter plus some older skills as he fights to survive and save Kim.

Another new-to-me author in David Beckler and an exciting novella which introduces us to his two main characters and best friends, Adam Sterling and Byron Mason, though in truth Mason doesn't have too much of a presence here.

Sterling is our main focus in his job as a firefighter. He's capable in action and is a reliable member of his team. Outside of work, he's struggling. The love of his life, Sarah has left him. Friends and neighbours think good riddance, but he's yet to be convinced that the break-up was for the best.

An encounter with his ex and her new beau, soon rids him of that delusion. Before long he's getting visits from the Sarah's father and accompanying heavies demanding money with menaces - her share of the increase in value of the property they lived in together.

On the work front, a series of fires, are targeted at one particular women, who the police seem to be responsible for, though they're doing a remarkably poor job of protecting her. Adam's work colleague, Steve seems to have taken a shine to the serial victim, Kim and soon, Adam is doubling up as babysitter-cum-mover-cum-protection in tandem with Steve.

I liked the fast-paced nature of the narrative, I liked the story lines which bubbled along nicely. There's a fair bit of well-described action, particularly in the scenes of fire-fighting and the odd bout of fisticuffs. Beckler obviously writes of what he knows, and convincingly portrays the job, with the camaraderie, the loyalty and trust in others and also the petty rivalries that the odd workplace arsehole (you get them everywhere) seems to enjoy and revel in.

Lots to like - 98% Sterling, 2% Mason - I read the second novella by Beckler soon after - The Money Trap where the focus is reversed.

Decent main character, Manchester setting, convincing plot lines and a twist which kind of left me with a bit of a moral dilemna.

David Beckler has his website here.
Forged in Flames and The Money Trap are the appetisers for Beckler's full length novel Brotherhood, which I'll hopefully read one of these years.