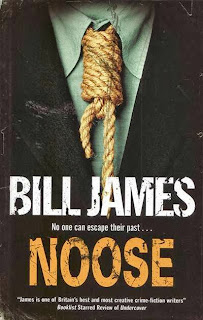 Britain, 1956. A young actress seemingly tries to commit suicide over a tangled love affair, but is taken to hospital and her life saved. The story is just the sort of thing that journalist Ian Charteris likes to cover: a poignant mix of near tragedy, possible thwarted romance, and glamour, needing sensitive but - of course - dramatic treatment. It should be a routine assignment, a welcome assignment. It would be, if it wasn't for the identity of the young woman. She may - just may - be Ian's sister. The unwelcome reminder of the past drags Ian back into memories of places and events he'd rather forget. As far as Ian is concerned, the past is a foreign country. And not just foreign. Fundamentally and cantankerously hostile. Vengeful, war-torn, dangerous. It is impossible to escape the past; the noose is already around Ian's neck, and every step he takes it tightens...And this is not the only noose.

Bill James is an author I have read previously. He has a 30 book long police series with detectives Harpur and Iles of which I have read the first couple (I think it was 2!), albeit some years ago. As well as his long-running series he is the author of many standalone novels, with quite a few published under the pseudonym of David Craig. It’s quite remarkable that with over 50 titles to his name, I very rarely encounter his stuff in bookshops, but tend to find him with his own substantial shelf in my local library. (This is something he seems to have in common with Nick Oldham, another British crime fiction author with 20 plus books to his name, all of which seem to be scarcer than rocking-horse pooh, apart from the library. Can anyone explain this phenomenon?)

Noose is his latest stand-alone offering and very enjoyable it was too. Only 170 pages long, which is my kind of book, but packed with enough disparate threads of story and detail as many books twice its length.
Ian Charteris is our main character in the book, but for a large sections plays second-fiddle to his father and his maritime exploits, including a well-publicised and oft-remembered rescue of a young woman - Emily when serving as a crew mate on a passenger boat. An unsympathetic, self-centred character is Charteris senior, a fact which Ian guiltily recognises the more he comes to understand him.  Ian comes into his own when witnessing an incident during a bombing raid in the Blitz. An incident which allows his father’s resentment to surface and which at its conclusion reopens old wounds causing his mother pain, a fact Ian comes to understand some years later. We fast forward to Ian’s National Service and his training in Lincolnshire in readiness for service in Korea.  Ian crosses paths with the much-older Emily, now a civil servant of some description and the spouse of the head of the training base. The settling of imagined debts from the past, conspire to keep Ian at home and safe, with severe consequences for his rival and friend, Ray Bain.

Having decided against re-enlisting when his service obligations expire, Ian refusing the overtures of recruiting agents for British intelligence pursues a career in journalism. Bain and Emily working together bring him back into the unwitting service of his country, before we finish back in the present (1956) and a journalistic story concerning his troubled and heart-broken half-sister.

Entertained?  Yes
Satisfied? Yes
Very enjoyable? Yes
Want to read more from him? Yes, it might be time to dig out more of the Harpur and Iles books.