Week 24 on the Crime Fiction Alphabet Journey hosted at Mysteries in Paradise. It would be fair to say, I’m not overly spoiled for choice this week in keeping to the format of my alphabet entries so far, highlighted enjoyed and unread gems that have inhabited or currently do the shelves of my dis-organised library.

Two offerings only this week, neither of which I have yet read, both with an eastern slant perhaps unsurprisingly. 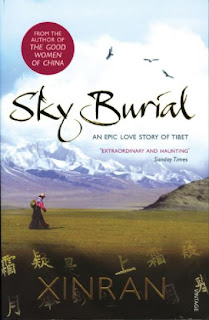 I will be completely frank and say I only discovered this author and book when researching possible additions to the library with the sole intent of padding out this week’s post. Apparently Sky Burial is based on a true story of a woman seeking news of her long missing husband. It has over 35 reviews on Amazon, with 24 of them 5 stars and only 1 paltry 2 star return with the rest scoring 3 or 4. Reviews are obviously subjective but at first glance it seems like it will be a decent read, without perhaps ticking the crime fiction genre box. I have recently read a crime fiction book – Tomorrow City - penned by an American based in Shanghai, but when I do eventually read this it will be interesting to acquire an eastern perspective on China and Tibet.

As a young girl in China Xinran heard a rumour about a soldier in Tibet who had been brutally fed to the vultures in a ritual known as a sky burial: the tale frightened and fascinated her. Several decades later Xinran met Shu Wan, a Chinese woman who had spent years searching for her missing husband who had been serving as a doctor in Tibet; her extraordinary life story would unravel the legend of the sky burial. For thirty years she was lost in the wild and alien landscape of Tibet, in the vast and silent plateaus and the magisterial mountain ranges, living with communities of nomads moving with the seasons and struggling to survive.

In this haunting book, Xinran recreates Shu Wen's remarkable journey in an epic story of love, loss, loyalty and survival. Moving, shocking and, ultimately, uplifting Sky Burial paints a unique portrait of a woman and a land, both at the mercy of fate and politics. 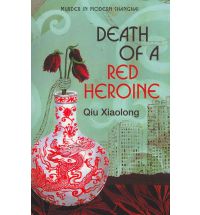 The second tome on the shelf marked X has been there for maybe 6 years or so. At a time when I decided to broaden my horizons reading-wise I acquired this book new. My plan to read a bit of Chinese detective fiction never materialized and it has gathered dust in the intervening period.  This was originally penned in 2000 and the author has subsequently written and published a total of 8 in the Inspector Chen series. Not sure when I will get to this, but I ought to at some point. Surprisingly for me, I haven’t yet been tempted to add more Chen books to the shelves in the meantime.

Shanghai in 1990. An ancient city in a country that despite the massacre of Tiananmen Square is still in the tight grip of communist control. Chief Inspector Chen, a poet with a sound instinct for self-preservation, knows the city like few others.

When the body of a prominent Communist Party member is found, Chen is told to keep the party authorities informed about every lead. Also, he must keep the young woman's murder out of the papers at all costs. When his investigation leads him to the decadent offspring of high-ranking officials, he finds himself instantly removed from the case and reassigned to another area.

Chen has a choice: bend to the party's wishes and sacrifice his morals, or continue his investigation and risk dismissal from his job and from the party. Or worse . . .

Next week should be an easier week in regards to having something a bit meatier to highlight, even though my Y offerings have all been fairly recent additions to the library.