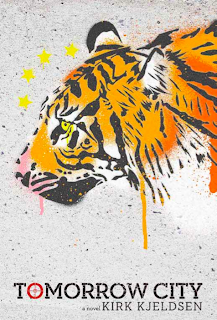 After an armoured car robbery goes horribly wrong and leaves four people dead, young ex-con Brendan Lavin flees New York City and attempts to start over again in Shanghai. But twelve years later, after opening a bakery under an assumed name and starting a family with a local woman, his former colleagues show up and force Brendan to assist in another armed robbery, of a wealthy diamond merchant. If he doesn't cooperate, they'll expose him and kill his family. Will Brendan help them pull it off and keep his new life intact? Or will his past bring him down, destroying everything else along with it? Tomorrow City is a riveting, literary crime novel that explores the theme of reinvention in Shanghai, the city that's reinvented itself more than any other in the world over the past generation.

One of the most enjoyable facets of my reading is discovering new authors that are writing the type of fiction I enjoy reading. Admittedly sometimes you take a chance on a new book from a fresh voice and you are a bit disappointed. Not on this occasion, thankfully.

On a recent trawl of some crime fiction blogs I check in on regularly, I encountered the book on the entertaining blog – Not The Baseball Pitcher. Always a sucker for a stunning cover and a big fan of heist fiction, I shamelessly contacted the author to see if I could blag a copy.

Said copy duly arrived about maybe 6 weeks ago and my hopes were further raised when reading the back cover.

Praised by the late Leighton Gage – “I had a twofold pleasure in reading Kjeldsen’s debut. As a writer, I admired his skill at evoking sense of place and his uncommon ability to evoke sympathy for a criminal. But the real pay-off came as a reader; Tomorrow City is such a cracking good story.”

Also Lou Berney, a favourite of mine after this great book – Gutshot Straight, enthuses – “A tight, tense crime novel about a stranger in a strange land trying to outrun the ghosts of his past. Kirk Kjeldsen’s Shanghai is a terrifically fresh and evocative setting, and the action jumps off the page.”

What’s the verdict then?

Short, sharp, fast, plenty of action, interesting settings - especially Shanghai, with a sympathetic, troubled but basically moral criminal struggling to break away from the past and provide a normal life for his partner and child. In Bernard Lavin, Kjelsden has created a likeable protagonist who I was rooting for throughout. His daily life as a Westerner, trying to run a business and a life successfully, whilst flying under the radar was illustrated superbly.  His adversaries in the book are similarly fleshed out, with the author providing them with both depth and detail, as opposed to being cardboard cut-out villains. They display a chilling lack of humanity or any empathy for others standing in the way of their goals. Shanghai, the bustling Oriental city of 23 million souls is also stunningly painted by a skilled author in his first published novel.

There is violence aplenty, which is to be expected when blaggers armed with guns and a lack of conscience go out on a job, but it was in keeping with the tale and not over-gratuitous. The novel’s conclusion is believable and had me wondering about Bernard Lavin in the days after I closed the book.

I’m looking forward to what Kirk Kjeldsen does next.

My thanks to the author who responded sympathetically to my request for a copy.