Week 25 and the penultimate entry for the Crime Fiction Alphabet Journey with the Y’s in the spotlight.

Kerrie at Mysteries in Paradise is collating other bloggers Y entries here, so feel free to pop over and check them out.

With the possible exception of maybe a Frank Yerby western or two many moons ago and here I could well be mis-remembering I’m at a loss to recall any books I may have read by an author with a surname beginning with Y.

Lacking confidence to claim for sure, I will concentrate on some unread offerings on the library shelves, most of which have been recent acquisitions with this week’s post in mind. I do suffer for my art! 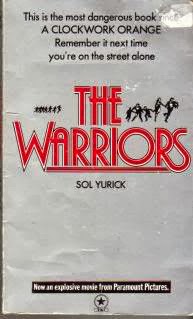 I’ve seen the film several times, though my last viewing was many years ago. Until recently I thought I had read the book also and scratched my head puzzling over how the two forms could be so different. The penny finally dropped that I was trying to compare Richard Price’s The Wanderers with Yurick’s The Warriors! Doh....I never claimed to be perfect!
The basis for the cult-classic film

The night of July 4. Teenage violence runs wild through the streets, exploding with firecrackers and patriotic celebration. In the Bronx, the police move in to break up a citywide convention of gang leaders. Whistles, shots, pounding nightsticks, and suddenly, six members of "the Family" - the Coney Island Dominators - are alone on enemy terrain. Their desperate flight back to their native turf is a journey filled with murder, rape, and subway mayhem that will leave the awestruck reader at a new station of awareness. 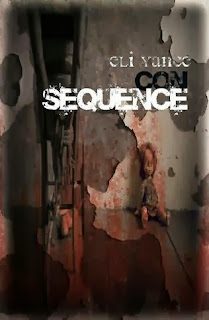 A recent cheap Kindle addition to the library........hitmen and conmen, violence and obscenity.....it all sounds like my cup of tea......someone put the kettle on!

The lives of two hardened hitmen, two experienced conmen and one millionaire businessman are about to change forever. Embroiled in separate worlds of drugs, theft, fraud and murder, their vices combine in a heartless and brutal cataclysm of violence. Three worlds thrust into one; 5 lives that will never be the same again.

A foiled kidnapping, a moment of opportunity and a deadly case of mistaken identity change the lives of two friendly conmen and destroy the mind of a heartbroken millionaire.
Consequence is fast-paced crime thriller. An intricate, edge of the seat novel with its fair share of violence, obscenity and surprise. 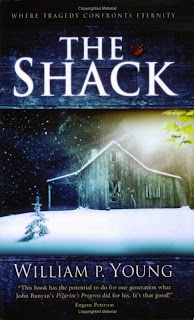 A couple of years ago, I couldn’t walk in a book shop or supermarket without being confronted by a copy of this offering. I picked it up a few times, put it down, not really sure what kind of book it was, but eventually succumbed when I saw a cheap copy in a charity shop. Is it a crime novel, a thriller, or something with a deep spiritual significance that will bring me closer to my God?  I will let you know when I have read it, whenever that is!

Mackenzie Allen Philips' youngest daughter, Missy, has been abducted during a family vacation and evidence that she may have been brutally murdered is found in an abandoned shack deep in the Oregon wilderness. Four years later in the midst of his Great Sadness, Mack receives a suspicious note, apparently from God, inviting him back to that shack for a weekend. Against his better judgment he arrives at the shack on a wintry afternoon and walks back into his darkest nightmare. What he finds there will change Mack's world forever. In a world where religion seems to grow increasingly irrelevant "The Shack" wrestles with the timeless question, "Where is God in a world so filled with unspeakable pain?" The answers Mack gets will astound you and perhaps transform you as much as it did him. You'll want everyone you know to read this book!

Margaret Yorke – Speak For The Dead 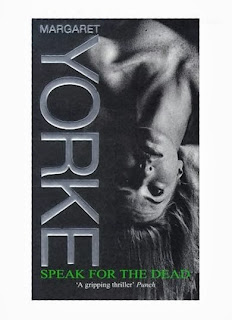 1988 saw the publication of this one. Sad to say I haven’t yet read anything by this fairly prolific author – 43 books, up until her death last year. They all used to have fairly distinct covers with her name travelling down the left hand side of the front. A recent addition to the shelves in the past month.

Carrie Foster was still young when she started breaking the law. And she took to it like a duck to water. Gordon Matthews had transgressed only once, but his crime was far more serious. A pity Carrie didn't suspect anything when he proposed to her. But then, why should she? Gordon looked presentable now- and prison had given him time to invent a new past. Nicholas was different- a shy young man, eager to please- and to Carrie their affair began as an amusing diversion. A bit of harmless fun, and Nicholas need never know about her other life with Gordon. But there was something Carrie didn't know either... 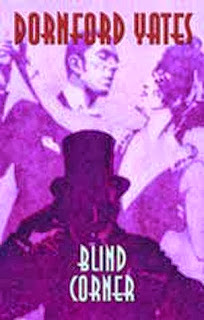 I’m not too sure how I will get along with this 1927 Chandos novel. Is he a dandy or a crime-busting super-hero? Will I want to read more about him? Unlikely, but you never know, stranger things have happened.

This is Yates' first thriller: a tautly plotted page-turner featuring the crime-busting adventures of suave Richard Chandos. Chandos is thrown out of Oxford for 'beating up some Communists', and on return from vacation in Biarritz he witnesses a murder. Teaming up at his London club with friend Jonathan Mansel, a stratagem is devised to catch the killer.

Yuill is a pen-name collaboration between Gordon Williams – Straw Dogs or The Siege of Trencher’s Farm – remember the film/book early 70’s? and Terry Venables, ex-England, Barcelona and Tottenham manager. 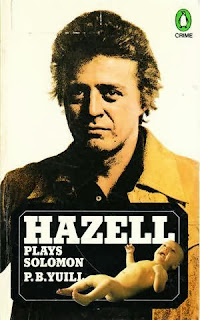 Warm feelings of nostalgia wash over me as I recall Nicholas Ball as Hazell in the hit-crime fiction drama of the late 70’s. My 14 or 15 year old self used to enjoy this and The Sweeney back in the day!
Cool, good looking geezers with leather bomber jackets and an easy way with the chicks - a million miles away from the awkward, painfully shy and spotty teenager looking on in envy! 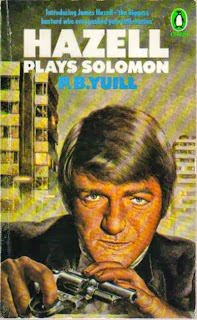 There were 3 Hazell books and a short story that were the inspiration behind the TV series. I will probably track down the other 2 books at some point. John Williams, who I mentioned a couple of weeks ago – Into The Badlands - claims “The Hazell books (are) probably the best crime novels written by a former professional sportsman." Originally published in 1974, I’m struggling to find a blurb for the book about the Cockney ex-copper turned PI. So I will have to settle for the first line from the book........

"My name is James Hazell and I'm the biggest bastard who ever pushed your bell-button."

* I ordered this online a week or two ago and it hasn't yet arrived. Hopefully the postman hasn't taken a fancy to it and re-homed it. When it comes it should be bearing either of the 2 cover choices, but I don't know which. I prefer the one on the right personally.


Next week we complete this year’s journey with some Z’s – hopefully they won’t send you to sleep!