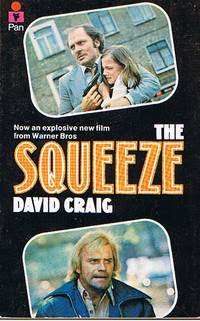 When security tycoon Robert Forman's daughter and mistress are kidnapped, it's the first move in a big robbery that needs every angle covered.

The kidnappers want co-operation instead of cash.

The snag is Jim 'Bottle' Naboth - a policeman who found booze the fastest way out of the force - because Forman's mistress is Naboth's wife ...

On his own and dying for a drink, 'Bottle' Naboth's making his come-back - the hardest way there is...

A bit of 70s Brit Grit crime fiction from celebrated Harpur and Iles series author, Bill James, albeit one that was put out pseudonymously. In all James has had nearly 20 novels published as David Craig.  The Squeeze was not the original title of the book. It was first published as Whose Little Girl Are You? Warner Brothers turned it into a film, released in 1977 starring Stacy Keach, David Hemmings and Freddie Starr. I have a copy of the DVD which I tracked down, but haven't watched it yet.

Like a lot of books from the time, it's short and to the point while still offering enough in the way of character development. The main focus is Jim Naboth, an ex-cop with a drinking problem and two young boys to look after. His wife Jill has deserted him. You kind of wonder about what woman would desert her binge-drinking husband and leave the two kids behind, but actually there's method in her madness. Her rationale - take the boys, he drinks himself to death. Leave the boys, he doesn't. He gets his head out of his jacksie and puts the bottle away, or at least turns to it less often.

Naboth does exactly that and rediscovers a sense of purpose ..... foil the kidnappers, save the wife and rescue his love rival's daughter, Christine at the same time.

I enjoyed it without being blown away. Decent story, interesting characters and motivations. I liked the uneasy alliance which developed between Naboth and Forman, as Naboth manages to assert himself a bit more forcibly as the book progresses. I liked the chemistry between Jill and her boyfriend's daughter, something which develops during their captivity.

I liked the idea that the kidnap itself wasn't for money, but as a means of exerting pressure on Forman to allow his security firm's vans to be robbed. It's a bit of a twist on the banker's family held hostage at home trope, while the banker empties the vault for the bad guys.`

Decent action, decent resolution - glad to have finally read it after sitting it on the TBR pile for a fair few years.