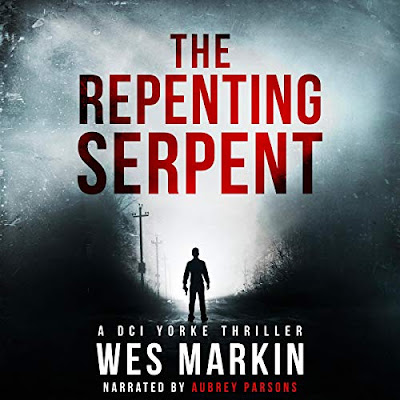 A vicious serial killer slithers from the darkness, determined to resurrect the ways of a long-dead civilisation.

When the ex-wife of one of DCI Michael Yorke’s closest allies is left mutilated and murdered, Yorke and his team embark on their greatest test yet. A  deeply personal case that will push them to their very limits.

And as Yorke’s team are pulled further into the dark, the killer circles, preparing to strike again.

The Repenting Serpent is a true edge-of-the-seat, nail-biting page turner.

The third of four books I have from Markin in my Audible library and the second full length novel featuring DCI Michael Yorke and his team.

If you like serial killer books with plenty of twists and a decent cast of police characters, some warped scheming and plenty of bloodshed and some urgency in the investigation, you'll probably like this series of books.

If you're a bit ambivalent to this trope in crime fiction, you probably might be less well enamoured.

If there are elements of the killer's delusions and motivations that sees himself re-cast in modern Salisbury as a long dead Aztec deity with the venom from a pet, poisonous octopus one of the weapons in his armoury you might think WTF. That would be me then.

I finished it about a fortnight ago and to be honest I think my eyeballs have only stopped rolling around in the back of my head. Sorry just couldn't buy into it and as such any investment in subsequent events didn't really interest me and the outcome was irrelevant.

I had to finish it because that's what I do.

A Lesson in Crime and One Last Prayer For the Rays have been enjoyed before. The next in the series, The Silence of Severance was listened to after this one.