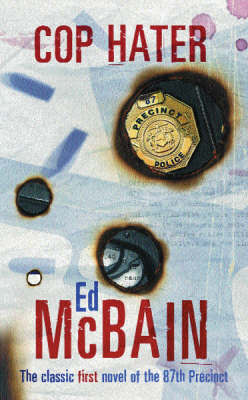 Swift, silent and deadly, someone is killing the 87th Precinct's finest...

When Detective Reardon is found dead, motive is a big question mark. But when his partner becomes victim number two, it looks like open-and-shut grudge killings. That is, until a third detective is murdered.

With one meagre clue, Detective Steve Carella begins his grim search for the killer, a search that takes him into the city's underworld to a notorious brothel, to the apartment of a beautiful and dangerous widow and, finally, to a .45 automatic aimed straight at his head...

First book in Ed McBain's classic series of police procedurals and one I finally cracked after a couple of previously aborted attempts - wrong book, wrong time before.

Once I got into it, it was quite a quick read and one which held my interest. The series runs to over fifty books and I have most of them after a mad splurge on E-bay a few years ago. Ideally I'd like to read them all, but I'll have to see how I go.

Here we get to meet several of the 87th Precinct characters, albeit a couple of them only briefly. Steve Carella is the main focus and we get some of his personal life as well as watching him do the detecting bit. He has a fiance, Teddy who is deaf and dumb and unwittingly gets involved in the outcome to the investigation.

Without ever feeling totally amazed or stunned by McBain's writing, I did enjoy the book. Things are relayed quite matter of factly. Sixty-five years old, it depicts a different time. Cops were the good guys and things were more black and white. They have respect from the community and media as a whole and at least in this book behave properly. I'll be curious to see if that changes as the series progresses.

I liked the everyday scenes of life in the squad room, the interviews at desks, the little snippets about each detective, his family, his salary, the camaraderie, the sense of loss, the visits to the bereaved, the briefing to a journalist and the sting in the tail which that provides - one which eventually forces the killer to show their hand.

The motive for the killings was quite clever and I enjoyed the pace of the book. One of the detectives who is killed is black, but there's no indication of any prejudice displayed towards him by his fellow officers, or subsequently in their dealings with his family. I don't know whether that surprises me or not. Here his skin colour wasn't important because he was one of them.

My edition had an introduction by the author in which he writes about the origins of the series and the research he did. This added to my enjoyment of the book.

Overall - quite good and I'm looking forward to more. Off to dig out my copy of the second - The Mugger - ready for a read sometime soon.