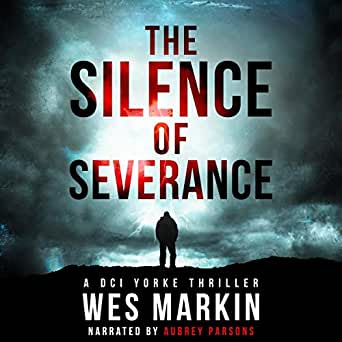 Your wedding day should be the most unforgettable day of your life. And this is one wedding that will never be forgotten.

When a police officer’s wedding day ends in brutality and chaos, DCI Michael Yorke is pulled away from his own wedding and into the bloodiest chain of events Wiltshire has ever seen.

As a heatwave tightens its grip on Salisbury, Yorke and his team face a race against time to find the most sinister and intelligent adversary they have ever faced. Christian Severance. But as the team chase Severance into the shadows of a dark past, Yorke’s own history starts to drag itself into the present.

Can they stop Christian Severance before he achieves the unthinkable? And will Yorke survive the revelations that claw at him from the darkness?

Four and out for me I'm afraid. I just can't be bothered with this type of stuff..... madness, murder, mutilation, mayhem = boredom, balderdash, bollocks (total) and brain turning to mush.

Plusses - ok the writing's not bad, there's an over-riding story arc concerning the main detective Michael Yorke, someone I feel like I've gotten to know a bit better over the course of a few books. I don't dislike him, I don't especially like him - indifference at best I suppose. He's a decent copper, he leads his team well, he inspires loyalty, most of the time and he gets results.

Pace is ok, the tension ramps up and there's an increasing urgency towards the climax of the book.

Minuses.... I really can't be arsed with serial killers. I don't doubt they exist but I'm unconvinced that they have all somehow gravitated to Salisbury in Wiltshire. I'd far rather read about an accidental murder, a by-product of a mugging gone wrong or a botched robbery or a love triangle.... anything but the cunning plan where murder follows murder, follows pointless murder, and all because little Johnny wet the bed and used to get locked in a cupboard as a boy, after doing so. Not here actually, but you get my drift.

Wes Markin has his fans and good luck to him and them. May they be very happy together, but deal me out.

Not the worst book ever, just one that bored me silly and which I couldn't wait to end. I had it on Audible so it did kind of help the work day go a bit quicker. And there's a bit of me that perversely needed to hear where it was all going to end up, the further the novel descended into farce and grotesque. I don't know if there's a yardstick for these types of books where if five people got murdered in the last one, the book might be twice as thrilling if you have ten die this time around? I didn't keep score though.

A Lesson in Crime, One Last Prayer For the Rays, The Repenting Serpent have all been previously enjoyed or endured - take your pick.