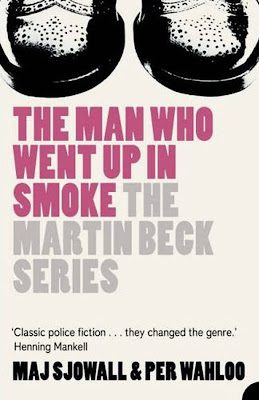 A journalist has vanished without a trace in Budapest. When Martin Beck arrives in the city to investigate, he is drawn into an Eastern Europen underworld in search of a man nobody knows. What he discovers will put his life at risk.

Swedish Detective Inspector Martin Beck is a master of human nature and relentless in his pursuit of criminals. The Man Who Went Up in Smoke is the second in the Martin Beck series, widely recognised as some of the greatest masterpieces of crime fiction ever written, inspiration for writers from Graham Greene to Henning Mankell.

After enjoying the series opener Roseanna a week or so before, I thought I'd strike while the iron was hot and put another small dent into the ten book long Martin Beck series....... Sweden, Budapest, the 60s and a missing person investigation.

A journalist, Alf Matsson has gone missing behind the Iron Curtain and Beck is yanked from his day old holiday to investigate with discretion.

We get to see Beck's investigative skills in action and his diplomacy in eventually working with a Hungarian cop in Budapest. Their relationship evolves from initial suspicion and mistrust to a respectful kind of camaraderie which continues after Beck returns to Sweden where the case gets eventually solved.

I liked the setting for the book and the east meets west vibe which the book gives off. On Beck's arrival in Budapest and after his initial settling in, he discovers he is being followed, the assumption being that the authorities in a semi-autocratic society would want to know exactly what a policeman with no official status was upto while prowling the streets of the capital.

Beck tries to retrace Alf Matsson's footsteps in Budapest. Matsson has been a previous visitor to the capital as well as several other cities in Eastern Europe, a pattern of behaviour which has seen him previously checked out by the Swedish authorities. I quite liked the direction the narrative takes or maybe the direction that the authors want the reader to take. I was kind of thinking of Matsson as some sort of spy in over his head. Then after some interviews, a dinner and attempted seduction, quickly followed by a vicious attack on Beck the motive appears to be drug trafficking related, before turning out to be something else entirely.

There's a twist when a realisation hits Beck at some point in the novel that things ain't quite what they seem and the case takes off in another direction entirely and with the assistance of his Swedish colleagues then gets solved quite quickly. At more of less the same time as Beck, I kind of guessed what had happened, or maybe the author's showed it to me. I was rather pleased with myself though.

I'm not usually a massive fan of police procedurals preferring time spent in the company of law breakers and PIs mostly. There is the odd exception though, Connelly's Harry Bosch for example. I can add Martin Beck to that list also.

My edition also had an enjoyable introduction penned by Val McDermid and a subsequent afterword which includes an interesting interview with Maj Sjowall.

I'm looking forward to reading the next case - The Man on the Balcony - soon.