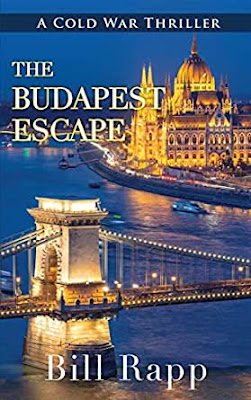 CIA officer Karl Baier has been running a highly-placed source in the Communist Party and Hungarian government from his post in Vienna for over a year. When he receives a warning that is source is in danger, Baier knows he will have to return to Budapest to find and rescue his agent—if he is even alive. Despite resistance from CIA Headquarters in Washington, Baier and a colleague will have to locate the Hungarian agent, overcome his reluctance and skepticism, dodge Soviet tanks, evade Red Army patrols, escape from KGB prisons, and disobey orders from Washington as they search for a way to freedom. Along the way he will discover support and betrayal where he least expected it.

A bit of a history lesson with a novel set during the time of the 1956 Hungarian Uprising. Our main character, Karl Baier is based with the CIA in Vienna and is trying to take advantage of a source in the Hungarian government. There's a ticking clock in place. He wants the information his source can provide, but this needs to be offset against the peril of leaving him in place for too long and risking his exposure. He wants to convince him to flee to Austria where he can be given sanctuary.

I think I enjoyed it more for what I learned about the time, than any great interest or enjoyment of the story regarding Baier and his source. Baier's superiors in Washington are somewhat distracted by the Suez crisis which is happening at the same time. His boss on the ground, forbids him from crossing the border again to reach out to his man and of course Baier is his own person and enough of a maverick to defy his orders.

When the revolution begins in earnest, we get an eyewitness view of the danger on the streets, the optimism of the people, the barricades, the joy at the small won victories over street corners and buildings, as for two weeks the uprising seems to have won the day. A negotiated settlement with the Russians appears imminent with concessions granted ....... and then the tanks move in.

During the course of the book which is the third in the author's Cold War series we get some back story of events which occured in previous books. We learn about Baier's wife and career and we understand that he places personal loyalty above any implications for his career. There's a fair bit of intrigue with several KGB and Russian characters in the book and there is also the back-drop of Russia and Krushchev finding its own way after the death of Stalin.

There is some tension throughout the book with various scrapes Baier manages to get himself into. I liked the view of the times and the depiction of a country in turmoil, with rumours abounding and cautious optimism eventually crushed.

An interesting read, but not one which was especially standout for me if I'm honest.