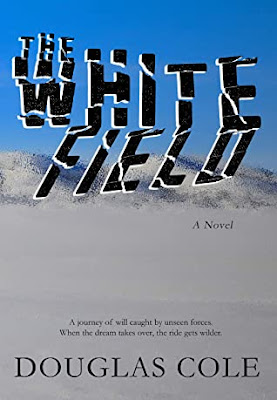 The White Field is a fast-paced journey of a man, Tom, fresh out of prison and trying desperately to rebuild his life. But he is caught by mysterious, unseen forces beyond his knowledge or control. After his release from prison, he is dropped back into the world in the wastelands of the city. In the menial work afforded the underclass, he begins his new life among characters at the edges of society, dwellers of the netherworld such as Raphael, a former cop from Mexicali singing Spanish arias in the mists of the industrial night among drug addicts and crooked cops; Tony, a stoner scholar with an encyclopedic knowledge of history based solely on the intricate study of rock and roll; and Larry, the bloated, abusive manager trapped as much as his workers in a world of tedium and repetition and machines. Think, The Three Stooges on acid. Unable to reconnect with what’s left of his family, Tom embarks on a criminal path more harrowing than the one that led him to prison in the first place. Lured in by the nefarious, Thane, he slips into a plan that will leave him with no way back. And with no place left in this world to go but prison, he makes one last run for freedom. Will he escape?

At 160-odd pages The White Field was a fast read but in truth one that didn't really set my world on fire. It's well written and descriptive and quite lyrical at times, but ultimately the story itself kind of petered out.

Tom is out of prison and working daily at a paint shop, doing hard manual graft. His wife has divorced him and has moved on. His two children don't know him and he hasn't really kept in touch with his father or brother. Apart from showing up for work and satifying the demands of his parole officer, there's nothing going on in his life.

He flirts at reconnecting with his children and reaches out. An awkward dinner ensues and he's reminded of his failings by his oldest son. He saves a woman from an awkward domestic situation by intervening. He chats regularly with his co-workers, but there's nothing outside of that environment that binds them together and offers him a sense of purpose or an outlet.

He meets up with an old friend or two in a bar. There is a mutual attraction for his main guy, Thane's girl. They meet separately and get it on. Before we know it, Tom is involved with his old friends in a scheme to rob a diamond retailer. Things do not go well.

There were large portions of the book I quite enjoyed, Tom's efforts with his family and his second attempt at connecting with his son after initial rebuttal. I liked the time he spent with his brother towards the end of the book. I liked his interactions with his work colleagues and the people around his lodgings. He seemed a decent sort. We learn about the circumstances of his incarceration - a kind of guilty by association thing.

He dropped points in his hook up with his friend's girl. Who does that to a friend? He dropped points in agreeing to participate in the robbery. He didn't seem to have any real plan or ambition once he left prison. Don't get me wrong, it isn't easy for offenders to reintegrate into society, but he was totally aimless. He adopted the path of least resistance when agreeing to sign up. He was a disappointment.

Overall I left the novel a bit puzzled as to what message the author was trying to convey. Maybe there was no message. Maybe it's about poor choices and fractional prospects for rehabilitation or redemption.