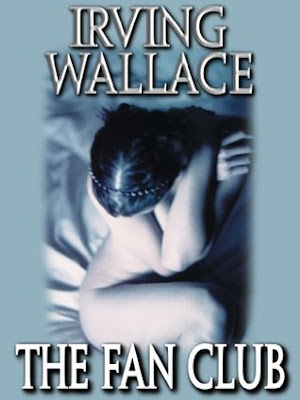 Imagine you are obsessed with a beautiful, famous actress. You know everything about her – at least, you know everything that the press, the tabloids, and the world knows about her. You think she is humble and nice and tired of living the Hollywood life. Better yet, you think she would fall for someone like you – a regular guy with a regular life. Now imagine that you told three other guys what you thought, and they all agreed – and you actually abducted this woman.

You are now in the head of the protagonist of Irving Wallace's thriller – The Fan Club. This is not a novel for the squeamish. After the abduction, things do not go as planned. At least three of the men involved force themselves on their captive. Each has his own problems, his own psychosis – his own reasons. Each is crazy in a different way, and their prisoner? She's not so sane herself.

The sexual situations in this novel show their roots in the cultural revolution of the 1970s. They are crude, rough, difficult to take. There are no punches pulled. The characters, while difficult to empathize with, are very believable. This novel is more a horror thriller than mainstream, but it has the power and authenticity readers have come to expect from Irving Wallace, one of the most popular and talented voices in American Literature. 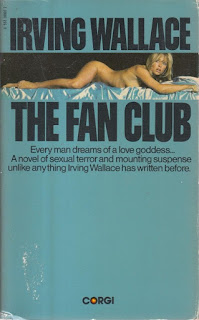 When I was growing up, I saw a copy of this in my parent's bedroom and was instantly drawn to the book...... surprise, curiosity, excitement - loads of different emotions flicking through my adolescent brain and nether regions.
It seemed so out of character for my parents. I don't think my dad ever read a red-top newspaper in his life, let alone a top shelf men's magazine. I always wondered where it came from. It wasn't something my dad would read and my mum was never much of a reader and still isn't. An unwanted hand-me-on from a friend? My teenage self, I'm not ashamed to admit was drawn towards it, like a moth to a flame and I must have read much of it, probably most intent on seeking out the racy parts.
Forty five years on, it was surprising how much of the book remained quite familiar to me.
Four guys, all strangers to each other are drinking in a bar, when the world's biggest sex symbol actress, Sharon Fields appears on the TV and instantly they start offering suggestions about what they could do for her and do to her. Typical bar room sleazeballs offering up crude remarks on an unattainable woman.
Only one of them, the dreamer has held this women close to his heart and in his head, totally obsessed, uber obsessed, seen every film – more than once, read every interview – cut out and kept, got every still photo of her – plastered on his walls, and he has a plan to give the lady what he wants, what they want and according to one or two well remembered interviews, what she wants.
We have… Adam Malone – a part-time writer and obsessed dreamer; Kyle Shively – a hard as nails, ill-mannered, Vietnam veteran and frustrated mechanic; Howard Yost – a fat, long past it former athlete and footballer, now married with two teenage kids and working as an insurance salesman and finally Leo Brunner – a married, mild-mannered, timid accountant. The four form the fan club and we're off and running.
All four, as the novel progresses we learn are deficient in some way or other - as if contemplating and committing kidnap for sex games doesn't mark their cards ......... arrogant, brash, boastful, entitled, divorced from reality, frustrated, angry, envious, psychopathic, sociopathic, self-centred, deceitful and more.
Irving from the initial bar scene leads us through ..... the plans for kidnap, surveillance, plotting, the deed itself and uncomfortably for the victim (and the reader) terrorisation of the actress, physical and emotional assault, followed by multiple forced rapes. The fan club have gone off script, led into action by the cruel, sadistic mechanic, the dominant one of our gang of four. Our out of touch dreamer's plans are in tatters. Sharon Fields, a helpless captive, with resistance futile, and her coerced cooperation may need the full use of her acting skills to keep her alive.
There are fascinating elements at play in the novel, many of which make it a difficult read in places..... a helpless victim at the mercy of multiple sexual predators. Is it exploitative to describe the rapes in detail? Further on as Sharon offers her physical consent to her captors, it's still rape we're privy to. We have a victim surrendering in order to survive. The enounters are again described in detail, but we have the added bonus of the victim's perspective on her participation and her motivation to tease details out regarding the identity of her kidnappers and rapists and clues to her secret location. These clues she tries to signal to the outside world, by use of one of her proxys. She plants seeds and germs of ideas in their heads individually and she manipulates them collectively to work towards her own goals of survival, freedom and revenge. Sharon's physical submission to her assailants, masks her inner steel and determination, with Irving's portrayal eventually showing her to be stronger, more intelligent, more imaginative than her initial conquerors.
Overall, I'm conflicted as to whether it's too exploitative, or whether it is pitch perfect with it's eventual outcome - for which there is a further twist and one which I'm again not entirely comfortable with.
In summary, its fast, gripping, compulsive, a page turner, exciting, interesting, topical and thought provoking.