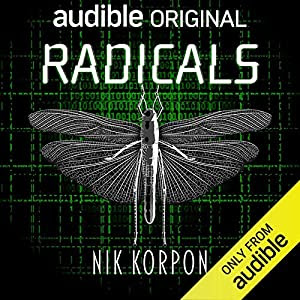 Jay Brodsky is an enigma. To his fellow agents at the FBI’s cybercrimes division. To his new partner. Even to himself. For someone whose skills are beyond question, he often seems just on the edge of losing control. He seldom speaks about his family and his personal life, but he seems to be hiding something. And he has an unusual obsession with even the most obscure punk rock.

So when a mysterious cyber-terrorist organization begins erasing Americans’ medical debt, Jay must put his personal issues aside to focus on an attack that threatens to destabilize the US economy. But when the trail leads to his own family, Jay will be forced to confront everything he never knew about his parents and his long-missing sister and decide where his true loyalties lie.

With his country and his mind racing toward a breaking point, can Jay find the answers before everything descends into chaos?

A fast paced thriller with an intriguing backdrop of punk rock, family history and current day anarchism. Our main character is Jay, an FBI agent. He is currently investigating some hackers who are causing mayhem by wiping out insurance debts. Each subsequent attack increases the threat to the economic stability of the country, irrespective of the rights and wrongs and morality of some of the companies suffering the losses. There's some real sleazeballs getting their comeuppance. While frowned upon and feared by the authorities, the actions attract some level of public sympathy.

Somewhat inevitably the crimes escalate and increase in ferocity ie murder and as a consequence the pressure on Jay and his unit multiplies.

I quite liked the main character, Jay. He's a loner and has several peculiar OCD tics which he has to enact, particularly when stressed. His part in the investigation, reveals to the reader, much of his past.... difficulties with his parents, a maverick upbringing of protest and rebellion, grief and bereavement, deep roots in punk rock and a strong bond with his sister, which fractured when Jay signed up to be an FBI agent.

As the investigation progresses and circles closer and closer to the old music scene he and his sister inhabited, our man is conflicted. Do his job, stop the anarchists and possibly do damage to his estranged sister or put absent family before duty. Uncomfortable family secrets are uncovered, a work partnership has potential for more, but only if he can open up his secret self.

As well as the quirkiness of the main character and his emotional baggage, I enjoyed the depiction of the music scene and the ground level participation in it....... band membership, gigging, touring, friendships, the collecting element and also the point at which for some people it stops. You grow, you move on, you depart the scene, you rebel back into normality and a career. The other fork in the road, you stay, you play, you live the doctrine, you submerse yourself in non-confirmity and embrace anarchy and you reject and despise the sibling that took the other path.

Family reunions can be fleeting and not always happy events, but blood can prove thicker than water.

Lots to like..... pace, plot, character, history, a nostalgic look back at a fascinating musical genre, which on this side of the Atlantic this reader embraced (albeit a dipping of a toe in the water, as opposed to a head first total immersion). There's a decent outcome to round things off. I'd be happy to see a second book with Jay Brodsky in the future.

Radicals was my first time reading author Nik Korpon's work. Irrespective of a sequel, it won't be my last. Old Ghosts and Wear Your Home Like a Scar sit on the pile already.