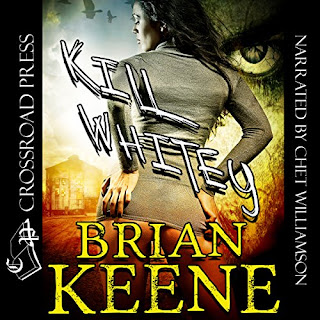 the supernatural, in the tradition of Terminal...

and his lonely nights spent drinking with his friends.

When Larry meets Sondra Belov, a beautiful exotic dancer, he finally gets

some excitement in his life, too much excitement.

Now, Larry's friends are dying and he's on the run from the cops, the

And if Larry wants to live another day, he'll have to figure out a way to

KILL WHITEY... how can you kill someone who cannot die?

For months Larry has been visiting the Russian run club, mesmerised by Sondra whenever she takes to the stage. The man has fallen for her big time. One night there's a panic in the club, Whitey and his heavies are tearing around trying to find something. When Larry leaves to go home, the search has moved outside and having spotted Sondra shaking under his car, Larry makes the impulsive decision to help her.

Flight and violent pursuit with much bloodshed entails for the rest of the book, as Larry after witnessing the murder of his friends and narrowly escaping death himself, finally turns into Rambo and tries to act out the title of the book and Kill Whitey. It's a bit harder than it might seem.

Whitey's survival instincts and abilities are what tip the book into a story with horror and supernatural undertones. The back story and brief history lesson involving Rasputin lend some believability to the plot. SOME!!! as some portion of my brain just doesn't cede all scepticism. I could suspend disbelief for the purposes of enjoying an entertaining, fast-paced, violent tale though.

Best writing ever? No not especially, but a decent adventure, plenty of gore and action, decent main characters, particularly Larry and Sondra. The others don't really have that much depth. We get Sondra's back story, but it is her telling it and she proves to be a little bit unreliable, a little bit deceitful and economical with the truth. Is Larry a little bit too naive and trusting. Oh yeah.

Good, escapist fun was had. I'll be back to try more of Brian Keene's work in the future.