A couple of books from author Stephen Dobyns - a man touted as the American Dick Francis. Stephen King has also referred to him as "the best of the best." 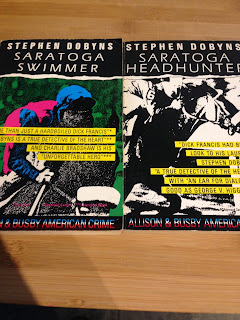 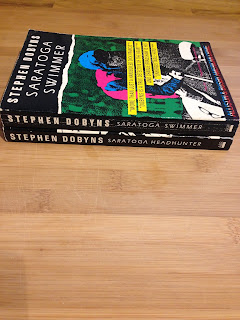 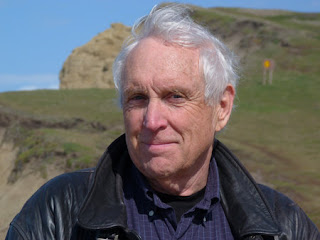 I've not read him anything from him yet. In addition to his 11 book series featuring Charlie Bradshaw, he's written a dozen standalone novels and numerous volumes of poetry.

Despite having three or four of these Charlie Bradshaw books on the pile which ought to be read first, I'm tempted by one of his most recent books - Is Fat Bob Dead Yet?
Maybe just me, but a book with a title like that demands to be read.

Saratoga Swimmer is the second in the series, Saratoga Headhunter the third. The series opener is Saratoga Longshot 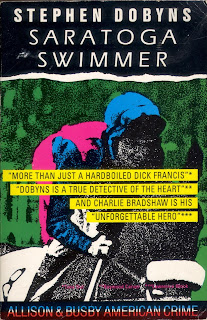 Ex-Cop Charlie Bradshaw and the Saratoga Police Department no longer see eye to eye. So Charlie has taken a job as head of security at local rich man, Lewis Ackerman's racing stables. But when Ackerman winds up dead at the bottom of the town's swimiing-pool the detective in Charlie sets to work to vindicate a short-lived friendship.

"Dobyns is a true detective of the heart" - Raymond Carver 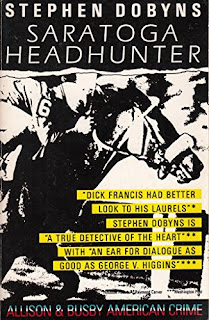 Ex-cop Charlie Bradshaw runs a private-eye agency in the American horse-racing town of Saratoga
Springs. But he's spending so much time moonlighting for the Wholesome Dairy Company for an absent friend he's hardly earning the rent on his office. And the quality of life isn't really improved by the arrival of Charlie's former high-school hero - a fat and corrupt jockey who's turned State's Evidence, skipped his Federal protection and is now on the run from the mob.

But Jimmy McClatchy's not on the run for long, for when Charlie returns from work the next day he finds McClatchy's headless body slumped at his dining-room table. And now everyone in this small faded town thinks Charlie sold the fat man down the river.

"His writing is honest, tough-minded and as uncompromising as his unforgettable hero" - Lawrence Block, Washington Post Book World

"Dick Francis had better look to his laurels. An American longshot, appropriately named Dobyns, is coming up fast on the outside" - Houston Post
Posted by col2910 at 23:37