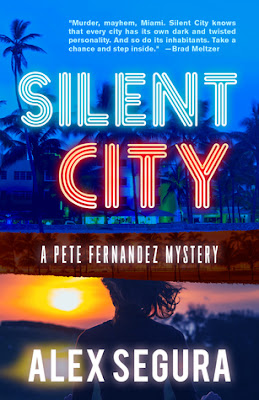 "The new George Pelecanos is here." — Son of Spade

Pete Fernandez is a mess. He's on the brink of being fired from his middle-management newspaper job. His fiancée has up and left him. Now, after the sudden death of his father, he's back in his hometown of Miami, slowly drinking himself into oblivion. But when a co-worker he barely knows asks Pete to locate a missing daughter, Pete finds himself dragged into a tale of murder, drugs, double-crosses and memories bursting from the black heart of the Miami underworld - and, shockingly, his father's past.

Making it up as he goes and stumbling as often as he succeeds, Pete's surreptitious quest becomes the wake-up call he's never wanted but has always needed - but one with deadly consequences. Welcome to Silent City, a story of redemption, broken friendships, lost loves and one man's efforts to make peace with a long-buried past to save the lives of the few friends he has left. SILENT CITY is a gritty, heartfelt debut novel that harkens back to classic P.I. tales, but infused with the Miami that only Alex Segura knows.

Silent City is the first in Alex Segura's Pete Fernandez PI series and also his debut novel. With some of the subsequent offerings in the series starting to stack up on the device I thought it was time to get acquainted with his work.

Fernandez is a barely functioning newspaperman. His star shone brightly for a while, but is now on the wane. Personal issues have overwhelmed him. The recent death of his father and the break up of his relationship with his fiancee, Emily has him seeking permanent solace at the bottom of a bottle. That Emily is still a presence in his life may or may not be helping him. To be truthful, I found him irritating. The whole alcohol thing, drinks after work, no stop bottom, oblivion beckoning, that crappy next morning feeling and next day repeating the cycle, kind of irked me and was tiresome. When he pulled his head out of his arse, he wasn't too bad company. Intelligent and capable when compos mentis I'm hoping in future books he gets a handle on his problem. It'll be a short love affair with the series if he can't.

Pete gets asked to check into the disappearance of another journalist Kathy Bentley at the paper, by the girl's estranged father, another newspaper legend who Pete admires. Somewhat surprisingly he accepts and is quite dogged in his efforts to track her down. Kathy is working on a story regarding a Miami hitman who has been plaguing the city for years, or so the urban legend goes. The authorities don't admit to it and the Miami police - allegedly corrupt and complicit have no interest in pursuing any sort of investigation into the killer. Pete's dead father was a cop and had his own theories on the killer - the typical one case that haunts the cop scenario.

Initially I kind of felt the premise for Pete's involvement was weak, but as the story unfolded and it became clear that Fernandez was being used as a patsy it made sense.

Once I was sold on the story line, I did enjoy it. There was a decent pace and flow to the narrative and a fair few twists and reveals. By the end of the book I was grudgingly enjoying Pete's company. I'm a big fan of US PI fiction and big city settings and can't remember my last visit to Miami in my reading.

Eventually - my kind of story, but it was touch and go for a while.

The subsequent series entries are Down the Darkest Street, Dangerous Ends and Blackout.