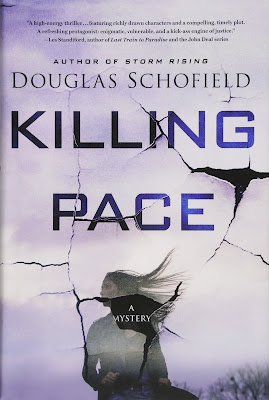 In Killing Pace, Douglas Schofield, author of Time of Departure and Storm Rising, delivers a heart-pounding tale set in Everglades City, Florida and Sicily, Italy with three important questions: Where am I?... How did I get here?... and most importantly... Who am I?

It's been two months since Lisa Green crawled barefoot and bleeding out of a terrible car accident. Her boyfriend Roland has been nursing her back to health under close watch. Lisa has amnesia. They both know that, but only Lisa knows that she hasn't lost her ability to reason. And reason tells her that she is not Roland's girlfriend. She is his prisoner. Gradually, Lisa remembers training and skills that she didn't know she had and is able to make her escape. When a sheriff's deputy finds her, she tells him she wants to report a missing person: herself.

What follows is a high-octane international chase, which involves US Border Control, the Sicilian mafia, and a shadowy organization specializing in trafficking infants taken from Syrian refugees and made available for adoption to wealthy American couples. Lisa, whose real name is Laura Pace, must figure out who she can trust and how to stay alive.

Another decent read which was enjoyed but which truth be told wasn't especially memorable. I don't imagine it will linger too long in the memory banks. This isn't a criticism, it did what it was supposed to do - entertain and for a few hours forget about the outside world.

I did enjoy the opening set-up with a women unsure of herself and her unfamiliar surroundings, not buying the story her "boyfriend" is telling her. Her situation resolves itself with an opportunity on a shopping trip. Her memory and identity soon returns - she's a law officer called Laura Pace - along with the realisation that she has been used while held captive. Further bad news arrives in the form of the news that she is a fugitive and wanted for a double murder.

We then track back in time to her role the year before in Italy as an undercover Customs agent investigating a counterfeit goods scam with auto-parts, while simultaneous vetting boatloads of refugees, for possible extremist affiliations and leanings. Whilst in her role, she is alerted to a baby trafficking operation which she endeavours to bring down - and which is also the cause of her present predicament. Someone has framed her for murder because she is getting too close.

It was a decent plot. We spend time in Italy with Laura, learning about her job and investigating dodgy shipments before the baby trafficking angle drops. We learn about her family history and lineage, something which is obviously very important to her - the need to live her life honouring the memory of her dead Nonna. We get her back story too. (Me personally, I'd just rather crack on with mine and not spend too much time debating with myself whether my long dead Grandparents were happy with me.)  The baby angle which has a Mafia connection gets investigated, resulting in a return to the US.

I'll confess a bit of confusion, as I must have stopped paying attention. She's been framed for a murder, but she was also on her way to her own execution, before a car crash which left her with amnesia and also at the mercy of her would be killer, who decided he could have a bit of fun before eventually ending her. I would have thought one or the other would suffice and don't quite get the need for both scenarios to be in play. If the author explained it, I must have missed it.

After the murder frame, which sees Laura a fugitive, we then spend the next portion of the book on the run, trying to join up all the dots with the help of some unlikely allies, solving the case which at the same time will resolve her own frame up.

I did enjoy it overall, though I may have over-elaborated on the bits that didn't work so well for me. We have a capable, intelligent main character, if not someone who is a little bit too good to be true. We have an interesting investigation and the European, US, refugee, organised criminal activity bit was well explained and plausible and in the end all the loose strands are tied up and explained satisfactorily. I liked the dual settings, especially the backwoods held as a captive environment as well as a bit of time in Italy. And the pacing was ok.