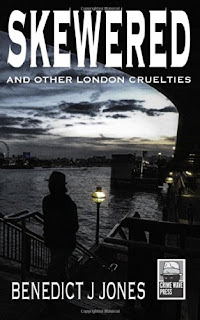 Benedict Jones’ novella Skewered takes us onto the mean streets of South East London. An Asian business tycoon has been kidnapped and Charlie ‘Bars’ Constaniou, just out from a third stretch in prison and stuck working in his uncle’s kebab shop, is more than ready to hand over the ransom money for a cut of the action. But simple plans never pan out and soon Charlie is up to his neck in a crooked family feud that involves a stellar cast of misfits including a psychotic torturer and a classic femme fatale. David Goodis meets Get Carter by the Thames in this Noir feast. Ten down and dirty short stories accompany Skewered into the British capital’s criminal underbelly.

Another new author for me and another fantastic collection of short stories, most if not all of which are set in London.

Skewered is the main event - an 80-odd page long novella featuring a recurring character from
Benedict Jones – Charles “Bars” Constantiniou. Charlie also features in Real Estate and Dirty Pictures.  He’s an interesting chap is Charlie – an ex-con, currently working in a kebab shop and a bit of a character. He drinks, he smokes and he’s not averse to imbibing the odd prohibited substance and he’s trying to make a go of things as an artist. If he’s resolute about anything – it’s not doing a fourth stretch in clink.

In Skewered, an old associate – Mazza Toshak offers him a temporary respite from slicing doner meat – a chance to earn a few bob doing a money drop and assisting in the recovery of Dev Singh, a kidnapped Indian businessman. Charlie hangs up his apron.

Uncomfortable reading at times as our kidnapper takes pleasure in torturing his hapless victim and dominating his accomplices. Charlie isn’t quite so acquiescent in submitting to his will though.

Not everything unfolds as planned. Our victim has a troubled family life…….a dead first wife, a beautiful if somewhat estranged daughter - Jazmina, a second wife and the difficult stepmother-stepdaughter relationship and a close confidante and adviser who may be a bit too close to our victim’s wife for comfort.  Family complicity in our money-making scheme?

Who’s playing who and who’s having the last laugh.

No happy ending, but at the resolution of our case, a new career beckons our main man. A few more lumps, bumps and scars acquired along the way but he’s now partners with Mazza.


Skewered is probably the highlight of the bunch, but all the stories in the collection are great. Mostly crime, bit there are a couple with a smattering of supernatural-other world undertones, which probably isn't my favourite genre - but they worked well for me. Like Clockwork is probably closest to pure horror. 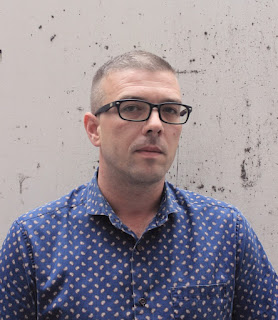 Fantastic collection from a talented author. I'm currently reading more from him at the minute.

Skewered was bought about 18 months ago on Kindle.