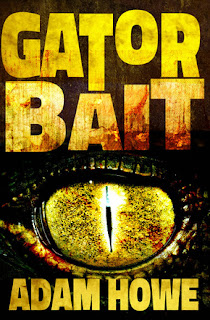 Three Fingers flees the city and finds himself tinkling the ivories at a Louisiana honky-tonk owned by vicious bootlegger Horace Croker and his trophy wife, Grace. Folks come to The Grinnin' Gator for the liquor and burlesque girls, but they keep coming back for Big George, the giant alligator Croker keeps in the pond out back. Croker is rumoured to have fed ex-wives and enemies to his pet, so when Smitty and Grace embark on a torrid affair…what could possibly go wrong?

"Adam Howe writes dirty stories populated with characters working like hell to leave a scum ring around the tub while they circle the drain. Gator Bait starts with mutilation and murder then shoves a rocket up its ass and goes south from there. Sticky, icky, pure pulp fun." —Jedidiah Ayres, author of Peckerwood

"My expectations were impossibly high for his new material after Black Cat Mojo, so I'd heaped a great burden upon Gator Bait. Instead of meeting these expectations though, Gator Bait exceeds every one." --The Slaughtered Bird

62 pages long and another fast-paced and enjoyable read.

Set in the 30s, Smitty is a piano player with his brains in his pants. His messing with another man’s wife sees him barely escape the clutches of the cuckolded husband with his life. When he does, he is minus a few fingers, which given his profession may cause him some difficulties in his line of work.

However when he rocks up in a bar in a Louisiana swamp, missing digits or not his tinkling on the ivories is an improvement on the incumbent player. Horace Croker gives him a job and with Smitty sworn off the ladies he may have a chance. Until he sees Croker’s wife – femme fatale Grace.

Great fun, great sense of place, lively characters – all schemers, chancers and risk-takers. Fantastic twist towards the end. When I got to the end, I was tempted to start it again. 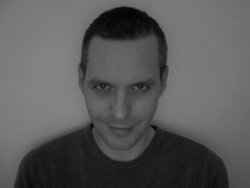 Adam Howe is a British author, who has dipped his toes in the horror genre as well (as Garrett Adams) – catching Stephen King’s attention for one.

He was kind enough to send me a copy of this for an honest review. I subsequently shelled out for Black Cat Mojo off the back of this. Looking forward to it. 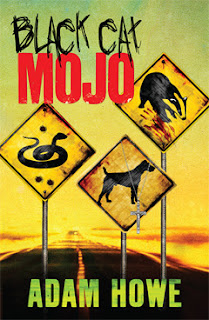 ABOUT BLACK CAT MOJO
In these three novellas of blackly comic crime and creature horror, you’ll go slumming with well-endowed dwarf porn stars, killer badgers, redneck mama’s boys, morbidly obese nymphomaniacs, dumbass dog-nappers, trailer trash Jesus freaks, diarrheic Jack Russell Terriers, not-so-wiseguys, mob-movie memorabilia collectors, junkie blackmailers, and giant man-eating Burmese pythons.
OF BADGERS & PORN DWARFS
To pay back a gambling debt and avoid being castrated, washed-up dwarf porn star Rummy Rumsfeld (of Snow White spoof Hi-Ho, Hi-Ho, It’s Up Your Ass We Go) must overcome a geriatric pederast, redneck pornographers, a morbidly obese nymphomaniac with serious personal hygiene issues, the ghost of his religious zealot mother, a dwarf-eating badger, and George Lucas.
JESUS IN A DOG’S ASS
Dumbass desperadoes Hootie and Poke incur the wrath of a trailer trash church group, not to mention God, when they kidnap a Jack Russell Terrier with the figure of Jesus Christ in its butt.
FRANK, THE SNAKE, & THE SNAKE
After testifying against notorious mob boss “Snake” Cobretti, embittered ex-wiseguy Frankie “The Tin Man” Piscopo emerges from Witness Protection to embark on a disastrous drug deal that leaves him fighting for his life against a giant Burmese python with a taste for Italian-American.
BONUS SHORT STORY
THE MAD BUTCHER OF PLAINFIELD'S CHARIOT OF DEATH
Washed up carny buys Ed Gein's car hoping to reverse his bad luck. . .
"The bad luck kept coming. The tent would collapse in the middle of his spiel. The trunk-lid would jam, or the hidden speakers refused to play. No one could stomach the car's slaughterhouse stink; kids cried, pregnant women's waters broke, fat guys puked up their beer and corndogs. One time the car's handbrake unlocked, and the Ford rolled back over some poor schmuck's foot; funny thing, the car hadn't even been parked on a grade."
Posted by col2910 at 00:10