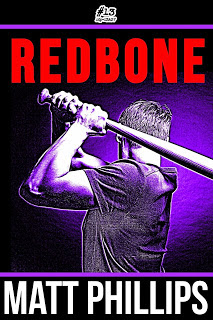 You can only take so much from a man before he has nothing left to lose... Calvin G. Redbone, veteran, is a simple man with a simple routine. He lives in a travel trailer, details cars, takes practice swings with his Louisville Slugger. His weekdays are always the same: nothing more complicated than deciding whether to doctor his morning coffee with a splash of bourbon. Until his world begins to change. Until his best friend winds up dead. Until Calvin realizes that nothing is as simple as it appears on the surface. Maybe not even Calvin G. Redbone himself. As he begins to unravel the truth about his friend’s life and death, the question becomes: what’s Calvin going to do about it?

Written in sharp-edged prose, Redbone is a captivating murder ballad-noir. Number Thirteen Press is building a list of #13 crime novellas, published over #13 months, on the 13th of each month.

First taste of author Matt Phillips and similarly my first time around the block with the publisher, Number Thirteen Press.

A short, sharp and dark tale about Calvin Redbone and his life and what happens when his equilibrium gets disturbed. Calvin, ex-military and now single is eking out a Groundhog Day style existence. Alarm clock goes off, up he gets, same breakfast, same work clothes, same walk to work to his janitorial-cum-cleaner boy duties at the car showroom. There’s a tinge of bitterness and regret every time he spies the divorce lawyers’ office over the road on his way to work, the one that presumably assisted the former Mrs Redbone’s passage out of his life and there’s a rueful reminiscing of happier times when passing the locked up and disused Sammy’s drive-in theatre; the one he spent many happy hours at, again in the company of the former Mrs Redbone.

Calvin’s fairly well liked around town. At the Speakeasy bar he frequents, Mona always has a kind word; at Jimmy’s donut shop he always jokes with the owner. At the trailer park he chats easily with the young Ricky Fife, the town’s rising football star and plays chess and knocks back drinks with the alluring and perpetually nightie-clad, trust-fund supported Marnie. His best friend though is Mister.

One day – Calvin’s world explodes…….Mister takes his head off with a gun, Calvin loses his job and a mystery developer reveals plans to replace Sammy’s derelict drive-in with a strip mall. Calvin already to a degree living his life in the past, before the time in the military and before the divorce, snaps…..and the consequences aren’t pretty.

Great characters and setting, Calvin retained my sympathies even after he crossed the line.

I got a review copy of this from the publishers – Number Thirteen Press. Their website is here.
Posted by col2910 at 00:18