A bit of a departure for me here on the blog; my first participation in a blog tour with a bit of publicity for debut novelist David Shafer with an extract from Whiskey Tango Foxtrot and my first giveaway, but only if you are UK or Ireland based.
-------------------------

To catch up on the earlier extracts before you read this one, 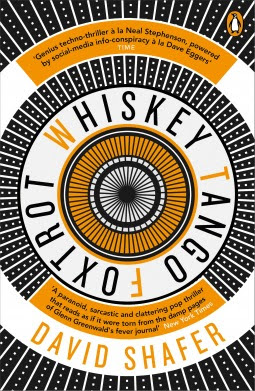 Once she had done all she could reasonably do on the work flowchart, Leila just sat and thought about her family. A low-level concern for them had been rising in her lately. Roxana had written that their kid brother Dylan’s new GF was a battle-ax. Dylan hadn’t mentioned a girl to Leila. Also according to Roxana, their mother had had two suspicious falls in the last nine months, the second one resulting in a broken wrist. Leila couldn’t tell by e-mail how exactly Roxana had meant suspicious. Like, neurologically? Or alcoholically? She noted again that no one ever informed on Roxana like this. Birth order did seem to trump the other personality predictors, Leila thought. Would that be forever? What about after their parents died? How far away was that? None of the Majnoun children had spawned yet. Was that breaking their parents’ hearts? Her mom’s, yes, probably. But her dad was a beloved middleschool principal in Tarzana, California. Maybe that job satisfied some of his grandpaternal needs?

Leila decided she would wait ten more minutes and then go in search of someone, maybe Colonel Zeya himself. Though good luck finding that guy. He must have an office in every dingy little government building in Mandalay, and a henchman to keep people out of each one. This was the third time that Leila had been promised her shipment, a shipment that represented six months of work on her part. But this was the first time she had actually been brought to the airport. On the previous occasions, she had been summoned to the terrestrial passage entry station behind the clamorous bus depot, and those had turned out to be shakedowns—demands for the payment of newly discovered taxes and import duties. Most NGOs allowed for a certain amount of this. But Helping Hand was not playing along. New York said that to do so would “abet endemic corruption”—or perhaps this was just Boss 1 screwing with Boss 2—and at first refused to release the funds that might win Leila her shipment. Only by haranguing Boss 3 was Leila able to convince HQ that the extra money was in this case a cost of doing business.

Still; still. Leila had moved similar shipments hundreds of times. This was a container of palletized medical equipment—fourteen short tons—that she’d coaxed without incident from Miami to Doha to Yangon and then to Naypyidaw, the bizarre new capital that the generals had erected suddenly in the middle of the country. But then her shipment had been waylaid and effectively ransomed by an invisible mafia of Myanmarese customs officers who could be reached only by phone, and even then only via their underlings’ phones. Once Leila figured out which government building contained the Department of Leila Antagonism, she and her driver, Aung-Hla, took the half-day trip to Naypyidaw and attempted a frontal assault. But the stupidly hatted officials she located—though shocked that she’d found them—only asked her to return with obscurer forms and more exact change.

Deep in the forest near Burma's border with China, a young woman sees something she wasn't supposed to see.

In Portland, Oregon, a troubled young man crashes his bicycle on his way to work - and then gets fired.

In New York, a famous self-help author goes on daytime TV - and suddenly conceives 'a book that would take him beyond talk shows'.

What connects these three people - though they don't know it yet - is that they have come to the attention of the Committee, a global cabal that seeks to privatize all information. And each of them will, in their different ways, come to take part in the secret resistance struggle spearheaded by a scarily clever hacktivist collective - a struggle built on radical politics, classic spycraft and eye-popping technology. Along the way, they are forced to confront their own demons, reconsider their values, and contemplate the meaning of love, family, friendship and community. Whiskey Tango Foxtrot is at once a page-turning thriller, a deeply absorbing psychological novel, and a visionary exploration of the possibilities and hazards of our online lives.

Out now in paperback and e-book 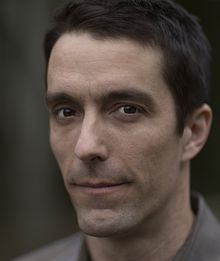 
David Shafer is a graduate of Harvard and the Columbia Journalism School. He has lived in Argentina and Dublin, and worked as a journalist, a carpenter and a taxi driver. He lives in Portland, Oregon, with his wife and children. Whiskey Tango Foxtrot is his first book.

The extract tour continues tomorrow and Friday at Crime Thrilla Fella and at The Welsh Librarian.