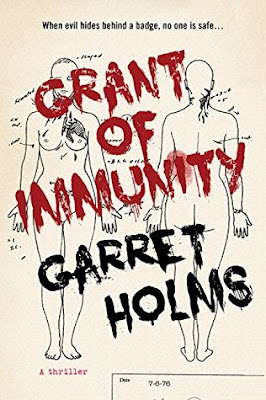 WHEN EVIL HIDES BEHIND A BADGE, NO ONE IS SAFE ....
It’s 1976, Los Angeles. Sarah Collins, a young mother of two, is brutally raped and murdered at the Hollywood Reservoir. For nineteen years, the murder remains unsolved and the case goes cold.

In 1995, the streets of Los Angeles are being terrorized by Jake Babbage, a traffic cop who uses his position of power to rape and murder innocent women. On his way to court one day, Babbage sees Judge Daniel Hart. The two recognize each other, and the terrifying night of nineteen years ago comes back to haunt the highly respected judge. The aftermath of the encounter brings long-buried secrets to light and tests the moral fibre of Judge Hart, who has committed himself to protecting those victimized by the very crimes of which he is now accused. 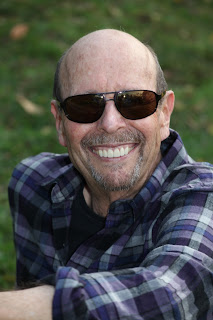 A crime fiction debut from US author and Judge, Garret Holms (pseudonym).

Extremely enjoyable, 430-odd pages long but it read like a book half that length.

A 19 year old murder of a young mother and the two protagonists involved that day are now a corrupt, abusive manipulative policeman and an LA judge. Their paths cross again.

It’s an interesting set-up and with the involvement of the murder victims’ grown children in the mix, as well as the original policeman who investigated the crime back in 1976, there’s plenty of background and flesh around the bones of this one.

Our abusive and murdering policeman, targets his original victim’s daughter and when he crosses paths with Judge Daniel Hart nearly 20 years after involving the then 15 year old in his evening of violence, sets out to bring down Hart and pin the long unsolved crime on him. Hart, a young lad at the time of the rape and murder, has endeavoured to move on from the events of that night, burying his secret and knowledge and attempting to live a productive and worthwhile life serving his community.

When he is exposed by Snake Babbage, the judge with his reputation in tatters goes on trial. Our original Detective Fitzgerald gets roped into working for the prosecution despite his suspicions of Babbage and his earlier confrontations over Babbage’s abuse of the badge, when he coerced the original murder victim’s troubled daughter into offering sexual services whilst on duty.

Great characters, great courtroom scenes with some fantastic jousts between prosecution and defence; as well as the pantomime villain attorney working for the other side.

Interesting to think about the consequences of sudden loss on children and the effect such a trauma can have on the life they lead afterwards, not always making the best of choices growing up.

Hopefully not a spoiler, but perhaps the ending was a wee bit too Hollywood with a thick coating of saccharine for my total liking, but I’m maybe being a bit picky.

An excellent book. Definitely interested in seeing what this author does next.

Grant of Immunity was self-published and pushed in my direction by Pai Media who are promoting it on behalf of the author. I’m glad I took a chance on this one.