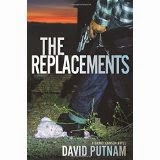 Bruno Johnson, ex-detective with Los Angeles County Sheriff's Department and an ex-convict, is hiding out from the FBI in Costa Rica, tending bar to support eight children he illegally rescued from abusive homes. Partway through a normal day, Barbara Wicks, a former colleague and the chief of police for Montclair, California, walks into his bar. Bruno is shocked to the core.  Is she there to arrest him and take him back to California? Turns out she's there to request Bruno's help.  Two children have been kidnapped.

The kidnapper, Jonas Mabry, was himself a victim whom Bruno rescued as a small child.  Now Mabry demands a fool's retribution, a million dollar ransom, and Bruno to put his life on the line to get the money. In this twisted turn of fate, Bruno returns as a wanted criminal to California.  Despite the risk of arrest and even his life, he cannot turn his back on these kids.  And neither can Bruno's girlfriend, Marie.

His second novel picks up with Bruno Johnson, our ex-cop settling into life as a bar-keep in Costa Rica with his girlfriend, Marie, his ailing father and the children they saved from a lifetime of abuse and hurt. Bruno is wanted back in the States by the FBI for his part in the children’s abduction. Bruno has a chequered past, as well as being a former cop he’s also an ex-convict, having killed his son-in-law after the man was responsible for the death of his grandson.

All is going well until a former colleague of Bruno’s walks into his bar and entices him back to the US. A couple of girls have been kidnapped and the perpetrator, Jonas Mabry will only deal with Johnson. The two have a connection, as 20 years previously Bruno saved Jonas as a small child when his mother shot and killed his two sisters before shooting her son and turning the gun on herself.
Bruno, despite the risk to his freedom and over the protestations of his family, goes back under the radar. Once he’s back in the States the pace picks up and is pretty relentless until the climax.

Child abduction, a rapid quick-fire investigation, cops, the FBI, Sons of Satan biker gang, a stakeout on a beached whale of an ex-bank robbing felon, ransom demands, gold bullion, Aryan Brotherhood, fractured and damaged family and history and a bitter resentment fuelling a desire for revenge.

Harsh, brutal, violent – Bruno is not averse to employing a bit of the aforementioned in his efforts to get him closer to the missing kids. So probably not a book for the faint-hearted. I loved it myself….great characters with heart, doses of humour and plenty of action. Unlikely characters, such as Karl Drago – our whale-like bank robber revealing hidden depths of humanity and stoicism and a desire to do the right thing, despite all the previous evidence to the contrary.

I was fortunate enough to receive and ARC from the author just before Christmas.

The Replacements was released earlier this month by Oceanview Publishing.