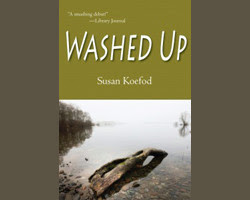 Susan Koefod's debut novel was declared a "smashing debut" by Library Journal and a finalist in the Midwest Book Awards. In WASHED UP, a shocking discovery on the banks of the Mississippi River forever changes 11 year-old Abatha Cox and Somerset Hills, the small Minnesota community she calls home. Lead investigator Arvo Thorson is the only person trusted enough to investigate the tragic murder, but he's drowning too--in a toxic cocktail of whiskey, vodka and gin--and his career will be dead in the water unless he can solve the crime. Christine Ivory, the brainy, fashionable and compulsively organized social worker caring for the girl has never been more intent on thwarting Arvo.

A second novel in the series, BROKEN DOWN, was released in September 2012 and a third has just been released this year BURNT OUT.

Praise for WASHED UP

“Arvo Thorson is an ex-smoker and current drunk with a weakness for blondes, and he's about to have a heart attack. My kind of detective . . . washed up and on the case. Readers are going to like this guy." --Steve Thayer, New York Times bestselling author of Saint Mudd

"WASHED UP is rich with suspense, poetic descriptions, and fully-fleshed, sympathetic characters. Susan Koefod is a writer to watch!" --Jess Lourey, author of the Lefty-nominated Murder-by-Month Mysteries

A great end to October and start to November seeing as this book straddled month end for me. Another new author, another great female writer and another debut novel in the form of Washed Up.

We start with the distressing discovery of a newborn infant on the banks of the Mississippi. Arvo Thorson, the star investigator is off on another drunk and AWOL. Abatha, the young girl who raised the alarm is nearly catatonic with shock. Eleven years old, orphaned and living with her grandmother, she already cuts a fragile and solitary figure with barely a friend to her name. Her well-being is entrusted to the care of the competent and sympathetic Christine Ivory; a social worker far better adept at managing her patient’s needs than her own relationships.

The discovery of the body attracts the attention of a ravenous media. With that and political pressure descending on the police force from an opportunist Senator; Arvo soon loses control of the investigation. Our right-wing politician has an agenda and a readymade scapegoat in the form of a young un-wed immigrant. When Arvo gets bundled off the case, despite information that may link the crime to a similar occurrence 20 years previously, his head comes out of the bottle long enough to get things back on track.

Washed Up is an interesting small town mystery. It tackles a difficult, uneasy subject with great skill and care. The dynamics and development of the relationships between Arvo and Christine and Christine and the girl Abatha made the book for me. Tangential relationships with ex-wives, mothers, grandmothers, bosses, colleagues helped add depth to the flawed characters, putting flesh on the bones.

The setting and background is superb, a small river town in decline; its industry spewing pollution out over the local school. The town ignored and forgotten by the politicians until tragedy strikes and some capital can be made in an election year. The Mississippi river probably shades the town in its character.

I was engaged right up until the end and was fairly well satisfied with the resolution and the climax of the novel. Not quite the perfect book, but fantastic nonetheless.

I hope to read more in the future from the author and her likeable cast of characters.

Well, I have a couple of “thank you’s” to offer in respect of discovering this book and another author that was previously under my radar.

Margot Kinberg on her excellent blog, Confessions of a Mystery Novelist recently hat-tipped William Kent Krueger in one of her recent informative posts. Krueger was a name that I had heard of but had never read, so off I went to Fantastic Fiction to find out more. On WKK’s page over on FF, there was a recommendation from him for Washed Up. I read the blurb for the book, fancied it and contacted the author directly.

Susan Koefod was kind enough to respond positively to my cheeky request for a copy of this – thank you!
Posted by col2910 at 21:21