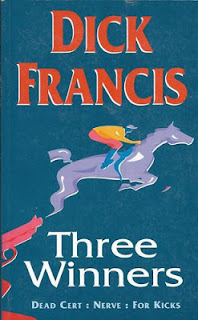 
Three jockeys were warned not to win their races, someone wanted good riders turned into also-rans. Bill died when the sure-footed Admiral fell, Joe was scared rotten, and Alan York became the prime target of a vicious gang. But Alan wanted revenge, and to hell with the danger.

I have seen and heard of this author for many years before finally deciding to give him a try. I read and enjoyed Forfeit last month and having picked up a few of his books recently decided to try his first published novel from 1962 next.


At 180-odd pages long it was a fairly quick read. Sufficient length for the author to develop his characters into more than stick people, but not over-long like so many of the books published today.


Alan York is our main man here. Rhodesian by birth, Alan’s a part-time amateur jockey in addition to looking after his father’s business from London a couple of days a week. Alan is trailing his best friend Bill Davidson during a steeplechase race, when disaster strikes the leading horse and jockey. Davidson suffers a bad fall, incurring fatal injuries after his horse landed on him. York having witnessed the accident is sufficiently disturbed to re-visit the fence where the incident took place.  Hidden in the fence is a coil of wire which has been used to bring Davidson and Admiral, his odds-on favourite mount down. Unable to attract assistance that evening, York returns to the course the next day with a policeman in tow, but the evidence has disappeared.


After the inquest where York’s insistence of foul-play is dismissed and an accidental verdict returned, Alan decides to investigate who is responsible for his friend’s death.  Whilst talking in the weighing room to other jockeys, it’s apparent that someone is trying to stop several nailed-on horses from winning their races in order to profit. As the plot quickly unfolds, Alan is threatened and warned off by the gang responsible for the race-fixing, which is in addition to a protection racket they have been operating in Brighton. There’s a bit of a love interest introduced, which also links in to the eventual unmasking of the head honcho controlling the criminal gang.


Short, sharp, concise, with a few twists and turns before the identity of the culprit was revealed.It’s unlikely that I will find myself thinking about this book much in the weeks ahead, but for all that I really enjoyed it. A fairly straight-forward thriller-cum-crime-novel (can someone explain to me the difference?), interesting and likeable main character, believable plot and all ends properly tied-up at the conclusion.  Verdict - nothing to complain about.


I acquired my omnibus edition of 3 early Dick Francis books a month or two ago from a seller on e-bay.