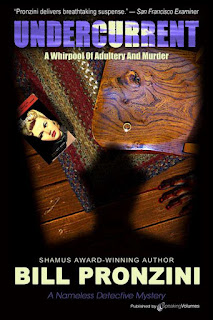 
The Nameless detective is hired by a young wife to find out whether her husband has been having an affair. He trails the husband to a motel of cabins in a small village, sees him meet with a bald man and then return to his cabin. Hours later, Nameless realizes the cabin may have a backdoor; he investigates and finds the husband has been murdered!


The third instalment in this long-running series, which incidentally has its 38th episode, published this year; not counting a couple of volumes of short stories and two novellas. I should have caught up to Nemesis in about 3 years-time assuming I stick with the pace I have set at one a month. I can’t imagine stopping as I’m enjoying myself too much with Nameless.


It’s a fairly straightforward mystery. Nameless follows the husband of his client easily enough. When he discovers Walter Paige murdered. After explaining his connection to Paige, he manages to ingratiate himself into the investigation when finding a kindred spirit in Quartermain, Cypress Bay’s chief of police.


Forensics indicates that Paige was with another woman shortly before he died. Part of Nameless’ attraction I think is his decency and empathy for the wounded souls that cross his path during his investigations; in this case, Judith Paige his client, duped by her callous husband.


Nameless, an avid pulp magazine collector, when not sleuthing, has his curiosity piqued when amongst Paige’s possession is a 20-year old mystery novel by a pulp fiction author, Russell Dancer; who Nameless is familiar with. Subsequent inquiries indicate Walter was previously known in the Cypress Bay area, where he socialised with Dancer and others, before disappearing from the scene, unknown to his circle to serve a four year jail-term.


Quartermain and Nameless keep digging into Paige’s Cypress Bay past and get a break when the “bald man” starts a fire at Dancer’s house and breaks into Nameless’ hotel room and steals the book Paige was in possession of at the time of his death.


Interesting, enjoyable, entertaining............I’m going to have to find a dictionary of superlatives because I’m running out of adjectives to describe just how much I’m enjoying these books of Pronzini’s without repeating myself.


I sometimes worry about recommending books to others, for fear that they don’t derive the same amount of pleasure from a book that I have read and enjoyed. I would recommend that you try at least one of this author’s books though.


On the basis that I scored the first 2 in the series a 5 from 5, we will shave his mark down to a 4, even though I found the book pretty faultless. I think it is important to keep him on his toes! At 70 we can’t have him getting complacent.


Here are my reviews for the first two in the series.
The Snatch
The Vanished


I bought this copy on Amazon for my kindle pc reader thingy. Next month book 4 is Blowback.