Week 7 on the Crime Fiction Alphabet 2013 tour, hosted by Kerrie at Mysteries in Paradise and it's the turn of the G's. 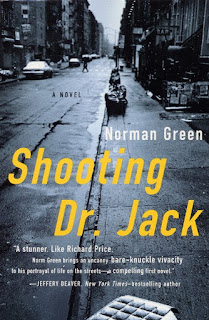 I can’t recall how I discovered this book sometime back in the mid-2000’s, but I’m glad I did. I absolutely loved this and once done with it set about acquiring copies of everything else he had written. Needless to say I haven’t read any of these subsequent books – shame on me!


It takes considerable skill to craft a gripping novel approaching 300 pages in which nothing much happens during the first 150. Fortunately for the readers of Norman Green's first book, Shooting Dr. Jack, Green's got the knack, in spades. His characters aren't drawn, they're acid-etched. His landscape, seamlessly rendered, is a grey, emotionless void:


Fall through the cracks of a better and kinder world, and you find yourself on Troutman Street. Dreams of a new world die in her sweatshops, cars and trucks die in her chop shops and junkyards, children die in her vacant lots, shooting one another for the right to sell crack on the two or three big intersections, junkies die wherever they happen to be when they shoot up--hallways, alleys, parking lots.


Tommy Rosselli, a.k.a. Fat Tommy, a.k.a. Tommy Bagadonuts, is a relatively brilliant entrepreneur who, while largely operating beyond the law, nonetheless owns a good and honest heart. Stoney, Tommy's brutal partner in a shady Brooklyn junkyard, is a smoldering alcoholic struggling to bring his body, soul, wife, and kids into some approximation of normalcy. And 18-year-old Eddie Tuco, an illiterate "Nuyorican" who works for Tommy and Stoney, faces temptation, redemption, and loss as a result. 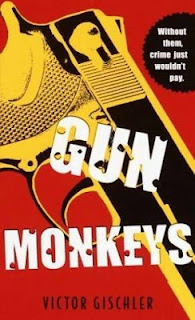 Gischler’s first book which I loved. I’m spoilt for choice with him because I could so easily have recommended, Pistol Poets, Suicide Squeeze, Shotgun Opera or Go-Go Girls Of The Apocalypse. I’ve missed out on his last few books, and if I had limitless time and money I’d remedy that situation.


Charlie Swift just pumped three .38-caliber bullets into a dead polar bear in his taxidermist girlfriend's garage. But he's a gun monkey, and no one can blame him for having an itchy trigger finger. Ever since he drove down the Florida Turnpike with a headless body in the trunk of a Chrysler, then took down four cops, Charlie's been running hard through the sprawling sleaze of central Florida. And to make matters worse, he's holding on to some crooked paperwork that a lot of people would like to take off his hands. Now, with his boss disappeared and his friends dropping like flies, Charlie has got his work cut out just to survive. If he wants to keep the money and get the girl too, he's really going to have to go ape...

Nominated for the Edgar Award for Best First Novel, Gun Monkeys is a fast, furious collage of wit and wise guys, violence and thrills—and a full-throttle run through the dark side of the Sunshine State. 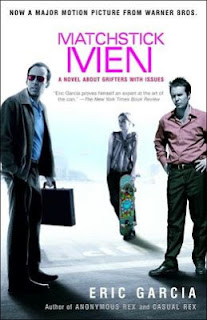 I loved the book, I loved the film. I found it terribly sad, but enjoyed it in spite of that, or maybe because of it. Read it or watch it!


"After the first of Eric Garcia's Rex books, I found myself thinking, ‘I wonder what he's up to now.' After Matchstick Men, a lot of other people will begin wondering, too."—Thomas Perry, author of Pursuit

Roy and Frankie are matchstick men—con artists. Partners in elegant crimes for years, they know each other like brothers and have perfected the rules of the game.

Roy is the careful one. Saves every penny. Takes his medication regularly. Without the pills, his obsessive-compulsive disorder kicks in and he is too nauseated to do anything but stare at the dirt on the carpet.

Frankie is the adventurous one, hungry for a big score. He wants Roy to join him in running a tricky game, but Roy is distracted—for good reason. Roy has just discovered that he is the father of a punky teenage daughter from a brief marriage that ended years ago. Much to the frustration of Roy's partner, the kid wants to get to know her father. She also wants to learn the family business.

Novelist Eric Garcia takes readers into the fast and funny world of grifters with issues. Matchstick Men is a dazzling literary con game that will keep readers guessing until the last page. 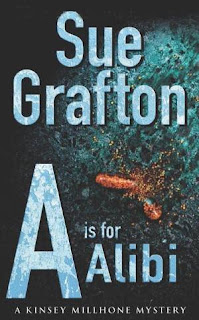 Sue Grafton – A Is For Alibi
In an effort to read more that has been written by the female of the species, I tracked this down recently after reading a mention of the author on another blog. Only unread for a matter of weeks, not even had the chance to get dusty!
Mystery novel featuring wise-cracking female private investigator, Kinsey Millhone. When Nikki comes out of jail after serving a sentence for murdering her husband, she calls in Kinsey Millhone to track down the real killer.
David Goodis – The Moon In The Gutter 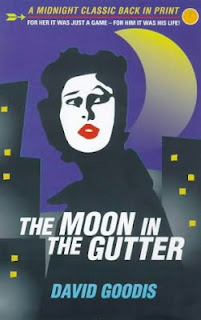 I have had this and other works by this prolific 50’s author on the unread pile for over 10 years. If I wait a while longer I‘m guessing it won’t matter too much.  Don't Shoot The Piano Player may be better known than this offering.
Another piece of pulp fiction, Goodis's 1953 noirish novel portrays the story of protagonist Bill Kerrigan, a poor street-hardened man who marries wealthy Loretta Channing. Kerrigan, however, soon learns that class is something you can't buy and once a street punk, always a street punk.
John Gardner – The Liquidator 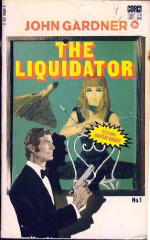 I like espionage and I like on occasion authors that can make me laugh. I don’t always need grit and realism in what I read, sometimes I need a giggle and this seems to fit the bill.  Acquired last year, along with some of the later ones, so it’s not been ignored too long.
Boysie Oakes is fictional secret agent created by the British spy novelist John Gardner in 1964 at the height of the fictional spy mania. Oakes is a richly comic character who is inadvertently taken to be a tough, pitiless man of action and is thereupon recruited into a British spy agency. He is, in actuality, a devout coward with many other character flaws who wants nothing more than to be left alone.
An example of the endearing points in these novels is the continuing appearance of monogrammed "BO" gifts from his mother - shirts, handkerchiefs, cigarette lighter, and so forth. He would never dream of NOT using them, even though he resents them.
The cowardly Oakes starred in another seven novels over the next 15 years and eventually, once again by inadvertence, becomes the head of the secret agency that has caused him to be in a constant state of terror for so long.
The first novel in the series, The Liquidator, was made into a feature film of the same name in 1965, starring Rod Taylor as Boysie Oakes.
Off to do some research on my H's!