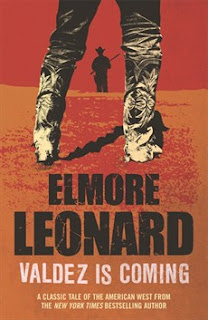 
They laughed at Roberto Valdez and then ignored him. But when a dark-skinned man was holed up in a shack with a gun, they sent the part-time town constable to deal with the problem -- and made sure he had no choice but to gun the fugitive down. Trouble was, Valdez killed an innocent man. And when he asked for justice -- and some money for the dead man's woman -- they beat Valdez and tied him to a cross. They were still laughing when Valdez came back. And then they began to die...


One of my first introductions to crime fiction was Elmore Leonard. I spotted a blurb by Stephen King on a late 80’s or early 90’s book. My reasoning was, if I like King and King likes Leonard, I ought to try him. Whilst over the past 20-plus years, I have come to take a lot of author recommendations of other authors as a bit of a mutual, sycophantic back-slapping that isn’t necessarily to be trusted; this time he was on the money. Obviously, the last remark was part tongue-in-cheek, but you can’t tell me it doesn’t go on.


Anyway after reading one Elmore Leonard, either Unknown Man No. 89 or The Hunted or 52-Pickup, I was hooked on the guy. It’s been a one-way love affair that has endured ever since. I’ve back-tracked on his earlier books, mainly Westerns when he started out writing and stuck with him to the present day with his Raylon character and the spin-off hit TV series, Justified. He’s had a few books that haven’t rocked me in this period, but he has consistently entertained and remained in my all-time top 10 author list.


Valdez Is Coming was a re-read for me. It’s a western originally published around 1970, with a film I think the following year with Burt Lancaster; one which I can’t recall ever seeing. This was selected as the May read for Pulp Fiction group members and as it was a while since I read “Dutch” I wasn’t too unhappy.


Bob Valdez is a lowly sheriff, employed mainly to stop the town drunks from killing each other when they’ve had one too many. Valdez is called to a stand-off where a black man and his Indian wife have been holed up in a shack with a gun-toting mob taking pot-shots at them. Tanner the local big-shot has claimed the fugitive is an army deserter who killed a man. Our protagonist, Bob gets suckered into killing him, when his efforts to defuse the situation fail. One unhappy pregnant widow and one unhappy sheriff bury the unfortunate victim as the mob and Tanner ride off into the sunset heading for the nearest tavern without a backwards glance.


Valdez asks the town folk to take up a collection for the widow unsuccessfully; before approaching Tanner to get him to contribute some money. Tanner takes exception to Valdez’s request and after being humiliated a few times, Valdez responds by kidnapping the women who is living as Tanner’s wife. Un-used to defiance from anyone and desperate to retain face, Tanner starts a man-hunt for Valdez.


Now that the sheriff has stood up to Tanner, the course is set for a collision between an immovable object and an irresistible force. Light v. Dark, Good v. Evil.


I enjoyed this book (again), reading the 200-odd pages during the course of a lazy day. Valdez is a moral, upright man, prepared to stand up for what he believes in, but only after enduring severe provocation. Courageous, spirited, tough, resilient, cunning and intelligent; Bob Valdez is a man to admire.


I couldn’t find my copy at home, so borrowed this from my local library.