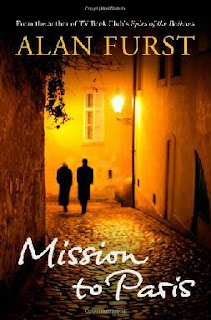 Frederic Stahl, a Hollywood film star, travels from Beverly Hills to the boulevards of Paris. It is a dangerous, difficult, seductive time: Europe is about to explode, and the Parisians are living every night as though it were their last. As filming progresses, Stahl is drawn into a clandestine world of foreign correspondents, embassy officials, and spies of every sort. His engagements take him from the bistros of Paris to the back alleys of Morocco; from a Hungarian castle to Kristallnacht, and the chilling heart of the Third Reich. But can he survive as German operatives track him across Paris? Gripping, haunting, and deeply passionate, Mission to Paris is the ultimate portrait of a people at war and Alan Furst's most panoramic, lovingly described, and finest book to date.

My first Alan Furst book and it was an absolute cracker. I have a lot of his earlier work sat around at home unread, but on the basis of this offering, hopefully for not too much longer.


Furst’s Mission To Paris is set – guess where? Paris in 1938. Our hero, Fredrik Stahl, an Austrian by birth and a successful actor in LA is making a film in Europe. Returning to Paris, after some years away, he becomes immersed in the manipulations and machinations of Parisian society. His presence in the city is seized upon by none too subtle Nazi elements that seek to use him to advance their cause. Stahl, unsympathetic to their aims, tries to avoid becoming a stooge for the Germans in the war being fought in the press about the French government’s preferred stance towards Hitler. Opt for appeasement and hope he leaves them be? Or stand up to the playground bully in the near certain knowledge that French resistance on its own would be easily overcome by the German military machine.


This is where I struggle with my reviews generally, how much detail do I put in, how much do I leave out?


Furst masterfully portrays a conflicted society and city; factions embracing the impending era of Nazi dominance and endeavouring to speed its ascent, factions fearful of the changes to come and the ever-invasive dread of what Nazism will mean for their families and friends, many of them having departed Germany previously in terror at the growing right-wing menace.


Furst’s Stahl was a realistic and compelling hero. Overcoming his initial reservations, he is increasingly drawn into a shadowy world of espionage, trying to provide a conduit for information between Americans anxious to influence the President at home regarding the German menace and practical support for agents on the ground in Berlin, at the risk to his public persona. Before too long the stakes are raised and Stahl is sucked into not just a battle to preserve his career, but his life and that of the woman he has fallen for.


Intelligent and educational, gripping, exciting and scary; this was one of the best books I’ve read in the past year or so, let alone this month.


I borrowed my copy form my local library in Leighton Buzzard.
Posted by col2910 at 00:58