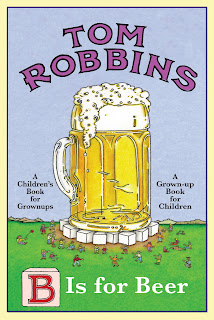 Have you ever wondered why your daddy likes beer so much? Have you wondered, before you fall asleep at night, why he sometimes acts kind of "funny" after he's been drinking beer? Maybe you've even wondered where beer comes from, because you're pretty sure it isn't from a cow. Well, Gracie Perkel wondered those same things.
So begins bestselling author Tom Robbins' first fiction in five years (and perhaps his most audacious ever), B Is for Beer explores various aspects of beer culture - ancient, modern, and otherworldly; brutal, infantile and divine - and dramatizes the surprising things that happen when the life of a feisty nursery school kid named Gracie Perkel intersects with each.
Billed by Robbins as 'the first children's book about beer,' this inspired work taps into the barrel of life's existential mysteries and is, of course, truly meant to sit proudly with his other novels in the grown-up literature section.

'One of the bravest writers in America.' --Chicago Tribune


Tom Robbins has been called "a vital natural resource" by The Portland Oregonian, "one of the wildest and most entertaining novelists in the world" by the FT, and "the most dangerous writer in the world today" by Fernanda Pivano of Italy's Corriere della Sera. A Southerner by birth, Robbins has lived in and around Seattle since 1962. His novels include Fierce Invalids Home From Hot Climates, Jitterbug Perfume, Still Life With Woodpecker, Skinny Legs And All and Half Asleep In Frog Pyjamas and Beer.


I like to step outside the crime fiction genre fairly frequently, just to keep my reading fresh. Tom Robbins is an author I’ve never read before, though I do have a couple of his books laying around somewhere, acquired in the belief that from what I’ve read about him they may well be quirky enough to tickle my fancy.


Well whilst struggling through Amis’s Lionel Asbo, I picked up this book in the hope of a short, light, entertaining diversion.


I just didn’t understand the whole raison d’être for the book, styled as a “Grown-up book for Children” and a “Children’s book for Grown-ups.”  Stunned that this ever got into print as it was in my opinion a massive indulgence on the author’s behalf.


We have a young girl, Gracie living with her parents and feeling the effects of their failing marriage. Her only confidant is her uncle, who lets her down and moves away with his latest girlfriend. Gracie has a slight obsession with beer, somewhat bizarrely. She gets in trouble at Sunday school when she mentions it. She has a drink, gets drunk, gets sick and is visited by the beer fairy...........do I need to go on? I’d rather have a drink.


On the basis that it was short and light, we’ll go 2 from 5


I’m not ripping up trees to get to my copy of Villa Incognito or Still Life With Woodpecker.


Acquired second- hand from a charity shop in the charming city of St Albans, so at least someone should benefit from my purchase.
Posted by col2910 at 00:57