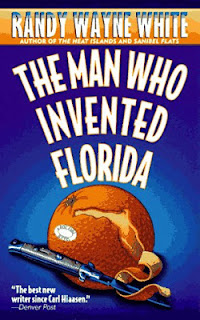 
When solitary marine biologist Doc Ford focused his telescope on the woman in the white boat, he didn't know his life was about to be capsized: that his conniving uncle Tucker Gatrell would discover the Fountain of Youth, that The National Enquirer would write about it, and that the law would beat down his door in search of three missing men.

But Doc Ford is about to find these things out -- the hard way. Because in the shadowy world of Southwest Florida, where gators yawn, cattle craze, and Indian bones are buried, mysteries great and small have found the man to solve them.


My 3rd read in the author’s Doc Ford series, and also the slowest, the weakest and the least enjoyable. I was probably 120 pages into this one before scratching my head and asking myself what is the mystery or crime or raison d’être for this 300-odd page long book? When will something happen, other than the mundane, the boring or the everyday?


At the end of the book, I wasn’t particularly enlightened or bothered. Doc Ford, likeable and interesting takes a back-seat role to his uncle. His uncle wasn’t anyone that stirred any strong emotions in me, either positive or negative and so the book was a bit of a damp squib or squid, keeping the marine theme going.


Amusing in places, but it was dull as dishwasher in many more, unfortunately.


Best line in the book........”When politicians looked at old people, all they saw was saggy skin wrapped around a voting finger.”


Not worth all my time invested for that little gem, back next month with Captiva – book number 4. Boy I can hardly wait! There was a 3 year gap in between books 3 and 4 - 1993-96 so hopefully Mr White had plenty of time to sharpen his pencil and re-focus on what made the first two more enjoyable.