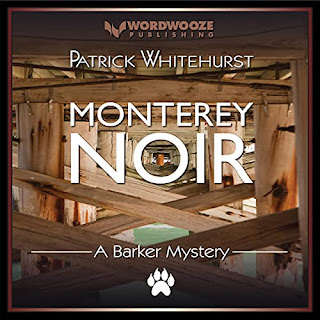 Synopsis/blurb...
A homeless hero with the crime-solving skills of Sherlock Holmes.
Not every hero lives in a mansion or works from a smoky, hard-boiled office. Enter Barker, a mysterious man with no memory of his past. Ferociously handsome and acutely observant, Barker makes his home under the soggy planks of Old Fisherman's Wharf along California's foggy Central Coast. His closest friends are an assortment of stray dogs, ranging from a large Rottweiler to a tiny Shih-Tzu, who live with him. Adventure and intrigue have an uncanny knack for crossing Barker's path.
In this first entry of the series; Bernie, Barker’s sole human friend, bestows his makeshift home upon the man and his dogs just before dropping dead. It’s up to Barker to honor Bernie’s last wish, to atone for his sins, which doesn’t prove to be an easy task. Meanwhile, forces are at work in other parts of the fog-swept city, which will lead the homeless detective and his dogs to a deadly confrontation in the heart of Monterey Bay itself.
Monterey Noir was a really enjoyable series of encounters with Barker, a relatively contented and settled vagrant who lives under the local wharf with an assortment of canine friends. He's well known around Monterey.
We have seven chapters.
Chapter 1: Nickel's Inheritance
Chapter 2: A Foggy Day's Problem
Chapter 3: The Surprise in the Sea
Chapter 4: Sharkness
Chapter 5: The Suspicious Fourth Fiancee
Chapter 6: The Wet Hundreds
Chapter 7: Wicked Joe
Each chapter involves a problem of some description which Barker gets involved with. We have the kidnapping of the mayor, the discovery of some counterfeit money with a friend's involvement and an incident of animal cruelty which given Barker's affinity for canines just won't stand. The rest I can't really recall. Along the way he crosses paths with a female police detective and there's some romantic potential as well.
I really liked the main character. I think his lack of a back story due to memory loss makes him a little bit more intriguing and enigmatic. He has a good heart and is relatively untroubled. There's no obsessing over what he doesn't have or what he's lost. In a material world, he's someone almost worth envying. There's a real connection and understanding between him and his dogs, not that he regards them in terms of ownership and owned. Barker is intelligent, athletic and courageous. It does have you wondering as a reader what he was in a previous life. I suppose the author has perfected the trick of leaving the reader wanting more.
The coastal setting of Monterey, with the sea and wind and fog adds another level of enjoyment to the stories. There's a real sense of place and atmosphere which Whitehurst conveys fabulously. Great writing. Interesting tales which when one was finished, made you want to dive right in to the next. .
There's a second series of adventures, Monterey Pulp featuring Barker which I might have to track down and enjoy. 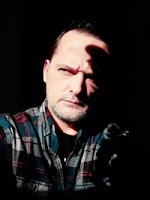