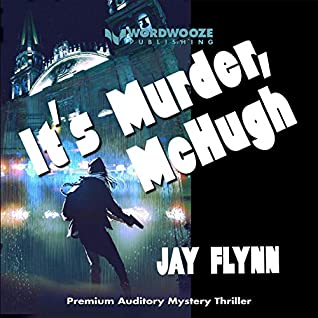 Synopsis/blurb...
McHUGH's BACK, DRUNK AND LOCKED DEEP IN A MEXICAN JAIL WHILE THE CLOCK TICKS DOWN TO DOOMSDAY! //
Someone is planning an international incident that would set off a revolution in one of the U.S.'s closest South of the Border allies, plus provoke a shooting war between the U.S. and Mexico – and it's up to McHugh, the two-fisted secret agent who always travels with a briefcase containing a fifth of Scotch and a .45, to stop it. //
McHugh is built of muscle, brain and go-to-hell guts, and he answers only to a Pentagon general – who answers only to himself. Now McHugh is in Ajijic, Mexico. Assignment: retrieve couple of AWOL Navy fly-boys, who have defected to the enemy and stolen a top secret jet fighter strictly CoD. Add a hacienda bristling with Tommy guns, an idealistic politician who only want's to conquer Mexico to save it, garnish with an alluring brunette, an incendiary blonde, and a bevy of Russian spies – and you've got McHugh's favorite dish – trouble.
This is the second book in Jay Flynn's 5 book McHugh series. The first, the cunningly titled, McHugh was enjoyed last year.
McHugh is a San Franciscan bar owner, when he isn't working for the Pentagon as a roving agent. here we have some south of the border, 1960s Cold War shenanigans with the pesky Russians as the bad guys. Some things just don't change do they? Here they just aren't quite so vicious and destructive.
McHugh is in Mexico investigating the disappearance of a couple of US pilots and their planes. After getting a few bumps on the head, having a run in with the police and getting shot at, he's hip to trouble brewing in the shape of a rich Mexican who fancies running the country. He has a private army on tap, and after some undercover work from McHugh, involving a shootout, a hostage situation, a partnership, an arrest, a breakout from jail and a plane ride or two.... revolution is averted, the Reds are foiled and McHugh can go back to romancing the dames and sinking a few beers.
Good fun and entertaining with out any real tension in the narrative. McHugh is intelligent and clear thinking while also a man of action. Adept with fists, either as weapons themselves or brandishing firearms. He's rarely short of female company. Here he has some support in the form of a fellow American, Chapman with the jury out on just what side, his other temprary sidekick, mercenary Jack Landry is batting for.
It's an easy listen, especially with Theo Holland's dulcet tones in my ear.
I liked it and I look forward to enjoying a couple more in series.
4 from 5
Read - (listened to) February, 2022
Published - 1960
Page count - 136 (4 hrs 11 mins)
Source - Audible purchase
Format - Audible
Posted by col2910 at 06:30