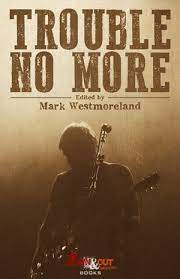 Turn on any classic rock station, and you’ll hear Southern Rock tunes that will make you stomp your foot and sing along to. The hard-rocking pioneers of the genre left behind a legacy of hard living that endures today.

The stories in Trouble No More celebrate those pioneers. Find ramblers, gamblers, swindlers, and double-dealers within these pages, all striving to survive more than the Southern humidity.

The authors bring the rough living of the Southern Rock genre to the page, and communicate the ache of the blues. There are twenty-one stories of heartbreak, murder, robbery, and barnyard brawls.

Despite not being a massive fan of the musical genre that inspired this collection - Crime Fiction Inspired by Southern Rock and the Blues - I have to say I enjoyed these stories. Like most anthologies, or indeed single author collections that I read, some I loved, some I liked and the odd one just passed me by. I read it a few months back in December, 2021 and already struggling to think what I had for my tea yesterday, it's fair to say all of the contents are a bit of a faded memory.

The table of contents is as follows... (more for the benefit of my OCD self, than in the belief that anyone will actually read it)...

Set One: The Most Painful Acts

Woman Across the River (Brodie Lowe)

A Trailer on the Outskirts of Town (J. B. Stevens)

Things You Used To Do (Joseph S. Walker)

No Mercy, No More (Rob Pierce)

One Way Out (Bill Baber)

Stolen guitars, stolen women, unfair consequences, trailer park confrontations, family tensions, economic pressures, poor choices, sex games, myths and tokens and the power of belief, fraternal stupidity, sisterly love or not, friends, betrayal, thoughts of revenge and an unintended outcome, friendship, a bar, a woman, a set-up, the passage of time, a hillbilly hellhole and a shakedown, a life in eight scenes, another bar, a pick-up, a guitar, a dead wife, a dead husband, family tensions and history, a 7-11 type convenience store, an attempted rape, stick-up and opportunity, history, inheritance, an accident, care, regret, sacrifice, and maybe a little guilt, a gambling addiction, theft, on the run, but not fast enough - ergo consequence, an old beau, a new beau, a loving mother, a bar, a fight, a chase, a death, the passage of time and revenge, trafficking, a man, another man's woman and a sucker, a cheating woman.