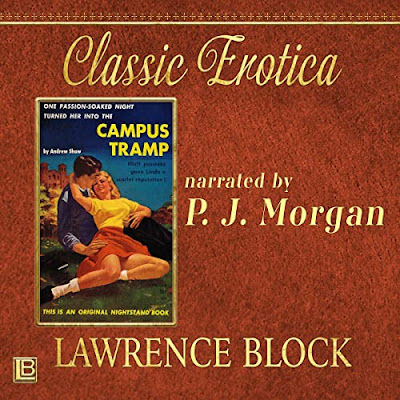 Synopsis/blurb....
There’s a song they used to sing at Antioch College, and it went something like this:
“She was just a little freshman
Victim of Admission’s whim
Then she met an upperclassman - we won’t name him -
And she had a child by him.
Now he’s off in New York City
Rescued by the co-op plan.
While she walks the streets of Yellow Springs, Ohio,
Looking for another man.”
Ah, they don’t write ‘em like that anymore, and it’s not hard to see why. And the sad story recounted in the song is not entirely unlike that of Linda Shepard, titular (so to speak) heroine of Campus Tramp.
The story of the book may be more interesting than the story told in the book. I wrote it in July of 1959 at the Hotel Rio on West 47th Street in New York. I’d just arrived from, yes, Yellow Springs, having spent a year writing books for Harry Shorten, editing the college newspaper, and giving short shrift to my academic studies. (This was my third year at Antioch. I was there for two years, took a year off to work at a literary agency, and then came back, only to discover that, having seen Paree, you couldn’t keep me down on the farm. I tried to drop out during the first semester, got manipulated into staying by my parents, and somehow finished the year. Now I was in New York, where I was to spend the summer writing, before returning for what was supposed to be my last year of school.)
Well. My agent came up with an assignment. William Hamling, publisher of science fiction and Rogue Magazine, had decided to initiate a line of erotic novels similar to what I’d been writing for Midwood. Could I write one?
I could and did, and thought it might be amusing to use Antioch as a setting, and to choose the characters’ surnames from the buildings and dormitory units on the Antioch campus. I picked the title Campus Tramp and sent it off, and they liked it well enough in Hamlingville (that would be Evanston, Illinois, if I recall correctly) to ask for more. But this was the first, and in Yellow Springs, it's regarded as a classic.
Another enjoyable early Lawrence Block book from late last year. Not too much in the way of mystery here, more one to set the pulses racing, or at least as much as you could bearing in mind it was written in the late 50s and censorship was in play.
Spoiler alert....
A virgin goes off to college, meets a nice boy, meets a bad boy, sleeps with the bad one, becomes obsessed, after a time they split, she becomes the college bike, re-connects with the nice boy, doesn't sleep with him, has a lesbian encounter, falls pregnant, skips classes, then knuckles down, but still gets her college marching orders, re-connects with bad boy, who isn't so bad after all when you get to know him. The End.
The course of true love never runs smooth does it? I quite liked this one. Even in his early days Block knew how to spin an entertaining yarn. Not too complicated, nothing very deep here, but still enough about it for me to have fun listening and I was always invested in the story and how it was going to turn out.
Block has undoubtedly written more satisfying books over the course of his long, productive career, but I invariably find something to like about all his work.