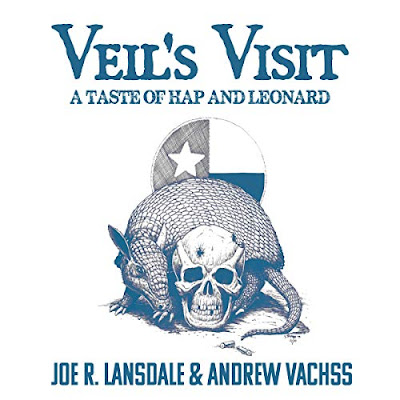 Synopsis/blurb....
Booklist called them "two of the unlikeliest but most likable amateur detectives in crime fiction" and The Chicago Tribune describes them as "colorful... lunatic... like a twister". They're Hap Collins and Leonard Pine, and if you've been reading Joe R. Lansdale's Hap & Leonard novels like Mucho Mojo, The Two-Bear Mambo, and Rumble Tumble, then this is the treat you've been waiting for.
Veil's Visit is an original Hap & Leonard short story co-authored by Joe R. Lansdale and Andrew Vachss, in which Leonard gets taken to court to answer for burning down a crack house.
A short interlude and an enjoyable one at that. Joe R. Lansdale and Andrew Vachss are two authors I've enjoyed ever since becoming immersed in crime and mystery fiction. Vachss' Burke books blew me away when I first encountered them in the 90s. Lansdale always surprises me with his range ... horror, crime, or Western. He can write it all. (Plus fantasy, but I try and avoid those books!)
I always want to beat myself up when I realise how long it's been since I've read one of their books and when I realise how many I haven't read. That's true of many authors on my TBR shelf. That Vachss recently passed was another cause for regret.

Veil's Visit has Vachss thinly diguised as Veil, a lawyer rocking up in Texas to defend Leonard for burning down a crack house in his neighbourhood. It's looking like a slam-dunk, especially as Leonard has admitted doing it. Veil (Vachss) has other ideas. We get some backstory as to how Hap knows the lawyer and some of their shared history and we have some fun in court.
Humour, action, character, dialogue and a satisfying outcome. A smashing half an hour's listening. I wished it had been much, much longer. It was also cool to have Joe R. Lansdale read it to me.
4,5 from 5
Read - (listened to) January, 2022
Published - 1999
Page count - approx 25 (0 hrs 29 mins)
Source - Audible purchase
Format - Audible
Posted by col2910 at 23:21