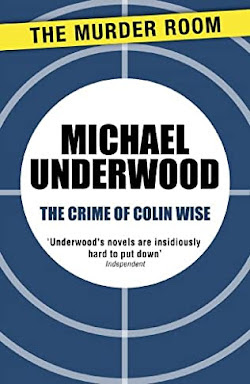 Synopsis/blurb...
The crime is murder - cold blooded, pre-meditated and motivated by sheer greed.
Colin Wise, a television repair man, is a well-mannered youngster. Among the homes he visits is that of Geoffrey Goodwin, whom he befriends.
And while Goodwin is preparing for an extended business trip to Australia, Colin Wise is also making plans: plans to ensure Goodwin will not be seen again, and will never be missed ...
A really, really clever book which had me gripped throughout.
A man, Colin Wise plans and executes a murder. Will he get away with it, or will he make a mistake?
Chilling, tense, absolutely enthralling throughout. The book is badged as one of Underwood's Simon Manton books, but the Detective doesn't put in an appearance until late in the day. Colin Wise is the real star of the show.
A loner, a plan, an unsuspecting victim, a manipulator, a plotter, a calculating employee, a love struck teenager, unrequited love, a murder, but no body, circumstantial evidence, a trial and a twist.
I love a court room drama, I love a battle of wills. I loved the matter-of-fact way Colin Wise goes about his business. I sympathised with him to a degree and I was conflicted as to whether I wanted him to get his comeuppance or reap the rewards.
Fantastic and I guess I'm going to have to seek out more from Michael Underwood. With nearly fifty books across five series with some standalones as well, I won't be stuck for choice.
5 from 5
Read - December, 2021
Published - 1964
Page count - 192
Source - purchased copy
Format - Kindle
Posted by col2910 at 02:31