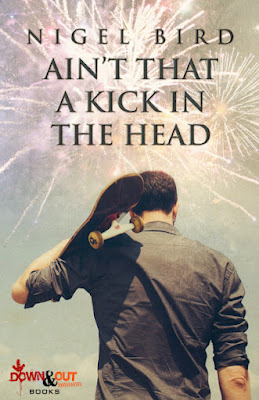 This year, the fireworks will be red hot…

Skates Farrington is a changed man. Gone are the smart suits, the dull meetings and the extra pounds. Nowadays, he gets his thrills at the skate park and from whatever substances his dealers send his way. The only thing missing from his life is his ex-wife. She’s shacked up with a respectable partner in an isolated farm and striving to create the perfect life. Skates is convinced that she will come back to him when she sees his new self, but when attempts to win her heart all over again are thrown back in his face, he decides a little gentle persuasion is in order. Now he can include murder and abduction among his new-found skills.

DI Oliver Wilson, leading the investigation, has more than a few things on his mind. The case and imminent arrival of his third child should be at the forefront of his thoughts, but the arrival of a sequence of unusual gifts is making him nervous. The packages are sending him a message, he just can’t work out what they’re trying to say.

Ain’t That A Kick In The Head is the explosive follow up to Let It Snow and My Funny Valentine.

Praise for AIN’T THAT A KICK IN THE HEAD:

“Nigel Bird knows his characters inside and out—what they want, how they think, how they grow and how they fail. Ain’t that a Kick in the Head might be his best work yet. A convincing, engrossing portrayal of what life is like for cops and criminals alike.” —Chris Rhatigan, All Due Respect Books publisher

Ain't That a Kick in the Head is the third in Nigel Bird's Rat Pack series. Just putting it out there - it's one of my favourite contemporary crime fiction series. (For a sense of completism; Let it Snow and My Funny Valentine are the two earlier entries.)

Here the focus is on solving a murder and the search for a missing woman - Justine, the girlfriend of the murdered man. From the police's perspective she's possibly a suspect, possibly a kidnap victim. We have the same team of cops investigating as those encountered in the previous books, though it's a slightly pared down team with less characters than before. DI Oliver Wilson. DI Mike Marsalis and DS Sue Nolan are our main cop characters. Our local king-pin villain, Johnny Yen, a constant and sometime confidant of one of our cops also makes a welcome appearance.

Marital disharmony, jealousy, regret, obsession, delusions, and some extreme measures taken to woo back a partner who has grown up, moved on and left you behind. If a six stone weight loss, a new lifestyle and some gentle persuasion won't win Justine back from new love Colin, perhaps Skates Farrington might need to go a bit nuclear. Ergo murder, kidnapping, drugging and incarceration in his basement until the apple of his eye comes around to his way of thinking.

As a reader we know who's done what and to whom plus the why, but it's fun seeing the cops trying to catch up. Particularly when they are a little bit distracted by impending fatherhood and some odd happenings (DI Wilson I'm thinking of you) and in the case of Marsalis and Nolan, an ever increasingly confusing friendship set ablaze by sexual tension and scorching testosterone levels with restraint competing against reckless impulse. It's a wonder any investigating got done!

Quite fast-moving. Plenty of dark humour in the dynamics of the police relationships and in the time spent inside Skates Farrington's head. We get a satisfying conclusion to the drama, realistic as opposed to happy. There's also an answer to Wilson's bizarre deliveries, which is some fallout from one of the earlier books.

Ain't That a Kick in the Head works well as a separate entity, but I think it would be slightly more satisfying if it were read after the two earlier books. It's a short series. My advice, get on board now.