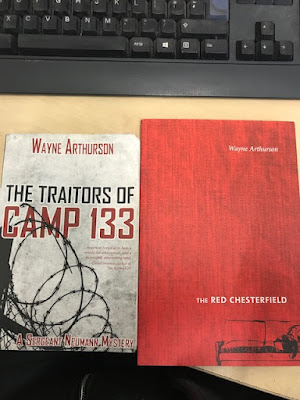 Arthurson was someone who had eluded my radar until a recent mention by Sam Wiebe had me seeking his work out. I've not tried him yet, but am looking forward to these two.

He has other works to his name. There's a three book series featuring an amateur detective, journalist and compulsive gambler - Leo Desroches. And there's a couple of other standalones. Surprisingly for me I'll stick with these two for now.

Captain Mueller is dead. Hanged, apparently, by his own hand. But ex-police officer and war hero Sergeant August Neumann doesn't think it's quite so simple. How could it be with blackshirts, legionnaires, and communist sympathisers vying for control of the camp?

Now Sergeant Neumann must navigate these treacherous cliques to find the truth while under the watchful eyes of his Canadian captors. 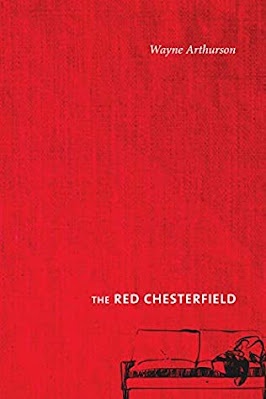 M is a bylaw officer, living with two brothers, in their parents' old house. While investigating a
suspicious yard sale, M discovers a red chesterfield sitting in a ditch. Looking closer, M finds a running shoe-and a severed foot.

Now M is involved in a murder investigation. Meanwhile, older brother K's work for a new political party begins to seem suspicious, while younger brother J navigates the complicated world of young-adulthood, and boss Rhonda demands more and more attention, M must navigate a world of Russian gangsters and neglected wives, biker gangs and suspicious coincidences. On top of everything else, M is determined to track down the owner of that red chesterfield and make sure they get a ticket.

The Red Chesterfield is a delightful, unusual novel that upends the tropes and traditions of crime fiction while asking how far one person is willing to go to solve a crime, be it murder or the abandonment of a piece of furniture. 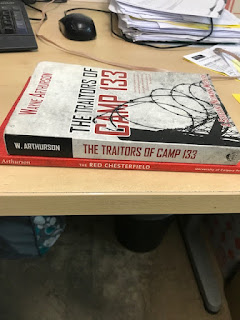