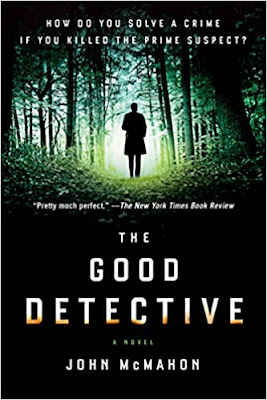 Synopsis/blurb ...
Detective P.T. Marsh was a rising star on the police force of Mason Falls, Georgia--until his wife and young son died in an accident. Since that night, he's lost the ability to see the line between smart moves and disastrous decisions. Such as when he agrees to help out a woman by confronting her abusive boyfriend. When the next morning he gets called to the scene of his newest murder case, he is stunned to arrive at the house of the very man he beat up the night before. He could swear the guy was alive when he left, but can he be sure? What's certain is that his fingerprints are all over the crime scene.
The trouble is only beginning. When the dead body of a black teenager is found in a burned-out field with a portion of a blackened rope around his neck, P.T. realizes he might have killed the number-one suspect of this horrific crime.
Amid rising racial tension and media scrutiny, P.T. uncovers something sinister at the heart of the boy's murder--a conspiracy leading all the way back to the time of the Civil War. Risking everything to unravel the puzzle even as he fights his own personal demons, P.T. races headlong toward an incendiary and life-altering showdown.
The Good Detective was a really enjoyable introduction to John McMahon's P. T. Marsh series.
Potentially it had the opportunity to go down the road of the tired and worn-out trope of the damaged detective, unhinged by personal tragedy, but fortunately it didn't.
Lots to like here - a detective in a jam because of an ill-judged decision, scrambling to stay one step ahead of his colleagues when the guy he put a beating on rocks up dead the next day, a race-hate crime, and an escalation with a missing girl and connections back to some powerful families with political clout in the state.
I liked the working partnership Marsh had with his colleague, Remy Martin. (Isn't that a brandy?) They compliment each other well, even if he sometimes takes liberties and keeps her out of the loop on occasions. It's as much for her own protection as his.
I enjoyed the story. I'm a little unsure, a month or so on from reading whether there was a slightly unexplainable (other worldly) element to some of the occurrences which transpired in the book. It's not usually a vibe I go for in my reading, but there was a sublety to it if that's what it was, that didn't bump me out of the book at all.
Books which see entitled, powerful people eventually receiving a reckoning are pretty much always guaranteed to hit the spot. Great story, great setting - Georgia. Topical in its examination of attitudes to race, particularly pertinent in the South. Both historical and present day.
I enjoyed spending time with the main character. I liked the cop dynamics on display, not just with his partner. There's mistrust and tension in some of the relationships and not without reason. There's some hostility between Marsh and his father-in-law who he blames for the accident which saw him lose his wife and son. By then end of the book, Marsh has achieved some level of peace.
I'm looking forward to reading more in the series. The Evil Men Do and A Good Kill await.