A busy month on the home front with plenty of TV drama consumed and not so much in the way of film. 8 vs 3 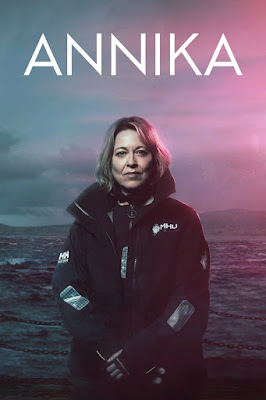 Annika (2021) - Alibi - TV Drama Series
Last episode (of six I think) watched and I really liked it. I do like the main actress - Nicola Walker. I liked her in Unforgotten (a series that I need to re-visit for the earlier episodes). I liked the Scottish setting to this drama. Remind me a bit of Shetland, even though it's set in Glasgow. A bit of a kicker in the final scene. I'm hoping there might be another series.
From Wikipedia ...
Annika is a British crime drama television series, based on the BBC Radio 4 drama Annika Stranded. Produced by Black Camel Pictures for Alibi and All3Media, the first episode aired on 17 August 2021.
The series follows DI Annika Strandhed as she takes over a new Marine Homicide Unit in Scotland.
The radio series Annika Stranded was also written by Nick Walker and featured Nicola Walker as Annika Strandhed but was set in Oslo.
This one rocked up on TV just as the second one was appearing in the cinema. I'm not a massive fan of the superhero film, but I quite liked this one. Plenty of humour in it and I do like Tom Hardy. It was much better than I expected.
From Wikipedia ...
Venom is a 2018 American superhero film featuring the Marvel Comics character of the same name, produced by Columbia Pictures in association with Marvel and Tencent Pictures. It is the first film in Sony's Spider-Man Universe, and was directed by Ruben Fleischer from a screenplay by Jeff Pinkner, Scott Rosenberg, and Kelly Marcel. The film stars Tom Hardy as Eddie Brock and Venom, alongside Michelle Williams, Riz Ahmed, Scott Haze, and Reid Scott. In the film, journalist Brock gains superpowers after becoming the host of an alien symbiote whose species plans to invade Earth.

A bit of a psychological mind-fuck as you watch this, not really knowing what is real and what is hallucinatory for the main character. Had us on the edge of our seats and a decent hour and a half's viewing.

Rain has early-onset schizophrenia, a condition that not only causes her to see vivid hallucinations, but also puts a strain on her parents. When she meets Caleb, a charmingly awkward new student at school, she finally feels she has a lifeline to normalcy. But as Rain starts to suspect that her neighbor kidnapped a child, she must soon figure out who and what is real while also battling the overwhelming forces that haunt her daily life.

Binge-watched this over a couple of days after my two girls had watched it separately. It's pretty compelling viewing. There's plenty of tension in the games themselves and characters you love and root for and ones you despise. The main character started off being a dick, sorted himself out, then IMO went back to being a dick at the end of the series. I felt a bit flat after it.
I guess we can't actually having ending endings anymore for TV dramas. They just have to set a hook for a second season.
From Google ...
Hundreds of cash-strapped contestants accept an invitation to compete in children's games for a tempting prize, but the stakes are deadly.

Horror set in the Appalachian Mountains as a group of young-uns going off hiking. Inevitably they get attacked in the woods. We kind of flip-flop a bit forwards and backwards in time as one parent goes looking for his daughter. Plenty of action and violence with unhelpful locals and a weird cult in the wilderness. I quite enjoyed it to be honest.
From Google ...
Wrong Turn is a 2021 horror film directed by Mike P. Nelson and written by Alan McElroy. The film is a reboot of the Wrong Turn film series, and stars Charlotte Vega, Adain Bradley, Emma Dumont, Dylan McTee, Daisy Head, Bill Sage, and Matthew Modine.

Six episodes of ten watched and as per previous series it's very tense on a personal level as far as June, her estranged daughter's situation and the other Handmaids are concerned. There seems a bit less bigger picture this time around as far as Gilead is concerned, especially with the Waterfords imprisoned separately.
I do wonder what the last four episodes will throw up, but I'm hoping it's all done and dusted after this series. I don't possess the energy or enthusiasm for a fifth. I do hope Aunt Lydia gets her just desserts before we are finished. Elizabeth Moss is her usual brilliant self.

From Rotten Tomatoes ....
1. Pigs
An injured June and the fugitive Handmaids find refuge at a farm; an imprisoned Lawrence tries to avoid a death sentence; Aunt Lydia reels from the loss of 86 children on Angels' Flight; the combative Waterfords learn of June's feat.
2. Nightshade
June plots revenge at the local Jezebels, before she and the Handmaids plan to leave the farm for the next safe house; Moira deals with the fallout of June's choices; Serena and Fred are bound together by a miracle.
3. The Crossing
Captured by Gilead, June faces a vengeful Aunt Lydia and endures a tortuous interrogation; Nick and Lawrence collaborate to protect June; in Toronto, Luke struggles with how to help June and Hannah.
4. Milk
June takes a harrowing journey; Janine remembers a stressful experience in her past; Serena tries to manipulate Rita.
5. Chicago
June goes on the hunt for more active rebels within the Chicago war zone; Janine attempts to help her fit in with the new group of survivors; Moira embarks on her first field aid mission.
6. Vows
June contemplates the possibility of freedom.

Not sure how many episodes in this series. I think we are three in so far and maybe a couple behind as it's airing on a weekly basis. Uncomfortable watching - domestic abuse and violence. Not sure I'm actually vibing it to be honest. Some of what has happened seems a bit bizarre and unlikely, though we may be on the cusp of an explanation. The jury is out.
From Google ...
Angela Black seems to be living her best life. She is married to a hard-working family man, has two sons and lives in lovely suburban London. However, Angela's picture-perfect life is hiding a terrible truth: she is suffering daily abuse from her controlling husband Olivier, and cannot escape him. Angela is then approached by a private investigator, Ed, who reveals all of Olivier's sinister secrets to her. She must decide to either endure her husband's abuse or trust Ed, and fight for her freedom.
Four episodes long .... a dead child with two families caught up in the initial disappearance of the boy. We have lies, secrets, an affair, marital disharmony, bullying, a hampered police investigation and a lot more besides. It was semi-interesting, but as none of the main characters were especially warm or likable it was nothing to get excited about.
From Google ....
The ordered lives of adult siblings Theresa and Helen are irreversibly altered when something terrible happens during a sunny family afternoon. When cousins Ben and Ava ask to go and play in the park, a chain of unforeseeable events is set in motion.

Hats off to Martin Clunes for his depiction of Colin Sutton in both this and the first series of Manhunt. He's added a lot of gravitas to his on screen presence, as I remember his Men Behaving Badly days.
Interesting to see the portrayal of police politics with fresh eyes added to an old, flawed, existing investigation .... dick measuring, resentment, hostility,
What a rotten bastard Delroy Grant was.
From Radio Times ...
Martin Clunes is set to return as former Met detective Colin Sutton in this ITV drama's second series.
Series two, Manhunt II: The Night Stalker, sees Colin Sutton investigate the real life story of a notorious serial rapist who terrorised south east London, with writer Ed Whitmore adapting the series from Colin Sutton’s diaries.
One of my daughter's favourite films ever - she adored Robin Williams. I quite like it, but it's uncomfortable in places .... lying, deceit, trickery all employed in the name of love apparently.
From Google ....
Daniel, a divorced actor, disguises himself as Mrs Doubtfire, an ageing female Scottish housekeeper, in order to work in his ex-wife's house and spend more time with his children.
Last few episodes watched and overall I really enjoyed it. The setting of a nuclear submarine makes for tense, claustrophobic viewing. Great acting. I liked how my feeling towards certain characters flip-flopped throughout the series.
From Wikipedia ....
Vigil is a British police procedural television miniseries created by Tom Edge and produced by World Productions. The six-part series commenced on BBC One in August 2021. It stars Suranne Jones, Rose Leslie, Shaun Evans, Paterson Joseph and Martin Compston. The series is set in Scotland and much of the action takes place on a nuclear-powered Vanguard class submarine.
Plot
Detective Chief Inspector Amy Silva of the Scottish Police Service (the fictionalised Police Scotland) is sent to HMS Vigil, a Vanguard class nuclear-powered ballistic missile submarine, to investigate a death on board, which takes place shortly after the mysterious disappearance of a Scottish fishing trawler. Her investigations, and those of her colleagues ashore, bring the police into conflict with the Royal Navy and MI5, the British Security Service.
Posted by col2910 at 05:14