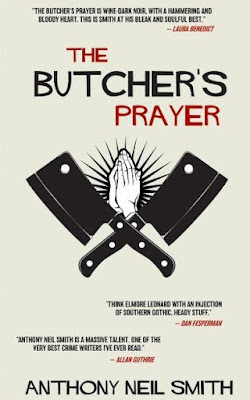 Synopsis/blurb ...
Called to a crime scene when a terrified woman raises the alarm on a horrifying murder, Detective Hosea Elgin finds the victim’s body has been dismembered with professional precision.
Very quickly, two small-time drug dealers are identified as the probable assailants and a manhunt is launched to bring them into custody.
With the two suspects on the run, the consequences of their actions continue to spiral out of control and it becomes clear that while one of them is focused on survival, the other wants only revenge.
As the net begins to tighten on the fugitives, Detective Elgin finds that the case begins to move very close to home and what began as just another murder investigation is developing into something much more personal.
The decisions he makes and the actions he takes may well solve the case and bring the criminals to justice, but in the process he might just tear his family and his church to pieces.
With The Butcher’s Prayer, Anthony Neil Smith shows once again he’s a writer at the very top of his game. This immersive piece of Southern Gothic Noir certainly isn’t for the faint-hearted but with the skill and nuance we’ve come to expect from Smith he dazzles with writing that is precise, measured and never gratuitous.
The Butcher's Prayer from Anthony Neil Smith is an absolute banger of a book.
Faith, family, church, religion, loyalty, trust, betrayal, murder, mutilation and revenge all collide.
Schisms in family and community are exposed after murder comes to town. Old resentments surface. A reformed prodigal son unwittingly gets turned back to the darkside. A church leader-in-waiting, eyes on the prize, allows ambition to cloud his judgment. People, mainly innocents get hurt. Meanwhile the second half of our killing twosome is determined to take as many victims as he can on a one-stop journey to oblivion.
Violent, funny, but thoughtful at times. Dark, satisfying and probably Anthony Neil Smith's best book to date. (That said - I've read less than half of his output, so maybe I'll dial that down a notch.)
I loved the backdrop of a church community and a family heavily involved in preaching. I loved the different characters in the one family and the dynamics between them all. The covetous brother, resentful and bitter. The failed preacher turned cop (His holy cock enraptured by some heavenly pussy, causing a fall from grace.) The wayward sister perpetually in and out of the fold. Her weak husband, partly responsible for some of the mayhem unleashed. 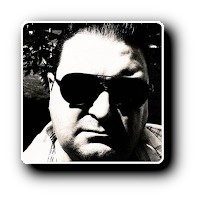