A couple from US author, Brian M. Wiprud. 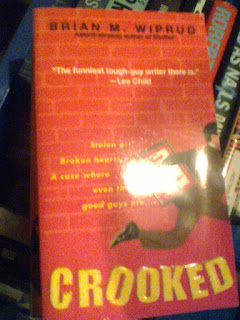 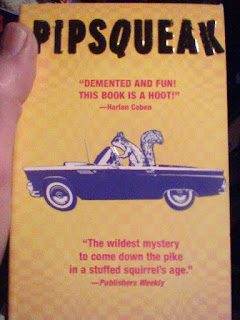 I read Wiprud's debut Sleep with the Fishes sometime between 2000 and 2009  and enjoyed it, without being blown away. I think when I bought that and these I was seeking something similar to a Carl Hiaasen vibe. I'm not sure that Fishes quite got there.

Twelve years is a long time, so I ought to give these a work out. 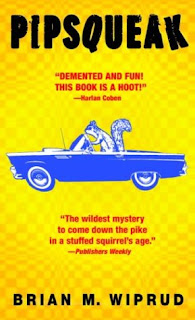 Tuning forks, thugs in plaid cummerbunds, digital TV, a dead biker, a stuffed loon and an old cartoon show? What's all this got to do with a ratty old squirrel puppet? That's the Pipsqueak story, featuring Garth Carson, a New York City taxidermy collector, and his gal Angie. After a murderous melee in an obscure antique store, the puppet goes missing and they find themselves entangled in a deadly swing band conspiracy and Soviet-era secrets.

"...the wildest mystery to come down the pike in a stuffed squirrel's age." --Publishers Weekly 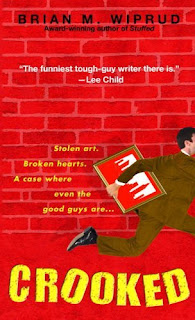 Nicholas Palihnic is a natty, tweed-suited hustler who knows every nook and cranny of New York - and a thousand ways to break a girl's heart. Beatrice Belarus is a Manhattan art dealer with an insatiable appetite for money - and for anyone who gets in her way. And a painting titled Trampoline Nude, 1972 has neither nudity nor a trampoline. But when Nicholas is hired by an insurance company to find the recently stolen painting, a murdered art thief points him to a trove of gold buried beneath Manhattan - and suddenly all roads are leading back to Beatrice. As fortune hunters, lovers, and other strangers gather around him, there's one thing Nicholas must remember above all else: in this business, it's better to be crooked than dead....