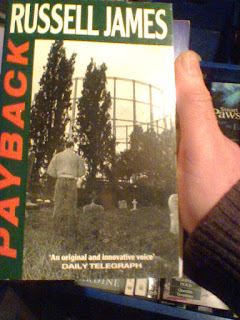 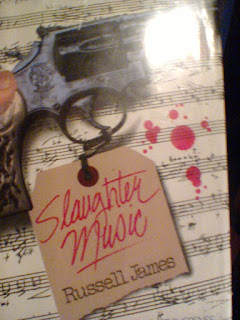 I think I have about half a dozen of James' novels in my collection. These two plus Underground, Daylight, Painting in the Dark and Pick Any Title.
Russell has been referred to by Ian Rankin as 'the Godfather of British Noir.' I guess he knows what he's talking about.
Payback (1991) 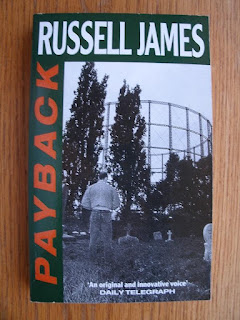 Floyd Carter returns to London for the funeral of his brother. Was Albie's death an accident or did somebody kill him? Discovering the truth isn't easy. A gang leader demands Floyd cough up the ten grand he claims Albie owed; another wants Floyd to join his network of drug pushers. Only Floyd's childhood friend, Suzie, provides a haven. Even then, her daughter is developing some dangerous habits. Plunged into a world of drugs and violence, Floyd grapples with the facts surrounding Albie's death as bodies start to pile up. Black humor underpins the action of this fast-moving, hard-hitting thriller. Russell James "writes a muscular, undecorated prose" (Sunday Times) which perfectly captures London's criminal underworld. A typically tough and thoroughly compelling read from the author of ten novels, including Slaughter Music and No One Gets Hurt.
Slaughter Music (1994) 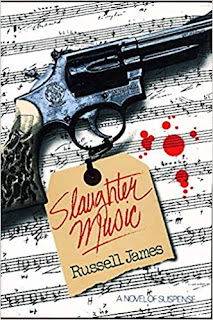 Tim Hawk is young, virginal – and a hit-man. He plans his assassinations well, rehearsing them with cool detachment, and his professionalism makes him a rising star in Kazan’s gang. Hawk’s only other interest, an unexpected love for baroque opera – Handel, Telemann and Purcell – is kept concealed. When Kazan returns from the Ukraine with his beautiful young bride-to-be, the naive and vulnerable Irena, Hawk presents the pair with a macabre wedding present. Other guests are shocked, but Kazan and Irena are intrigued. Then Kazan, fatefully, charges Hawk with protecting his prized young bride – half Kazan’s age, much the same age as Tim Hawk.
“When beauty’s the prize What mortal fears dying?”
It isn’t only Kazan’s marriage that is vulnerable. His empire is under siege. As threats and danger mount, Kazan’s marriage and criminal empire are undermined and he finds himself betrayed and let down on all sides. The only people he can rely on, it seems, are his wife and the trusted Hawk. On Guy Fawkes night, as a full-scale gang war breaks out, the doomed trio rush to a violent and operatic climax.
Posted by col2910 at 06:20