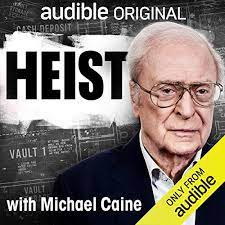 Synopsis/blurb ....
Sir Michael Caine - perhaps best known as gang leader Charlie Croker in 60s crime caper The Italian Job - tells the stories of remarkable heists and extraordinary robberies from around the world, as remembered by the masterminds, detectives, victims, journalists and witnesses that lived through them.
For more than 60 years, Caine has played thieves, criminals, gangsters and the detectives trying to catch them. But there’s Hollywood and then there’s real life... and that’s when things get really interesting.
From the largest bank burglary in American history, to the world’s most audacious book heist, Heist with Michael Caine travels to America, Australia, Stockholm, Antwerp and everywhere in-between to tell true stories behind the world’s most daring heists.
A Somethin’ Else production for Audible Originals.
This is an Audible Original Podcast. Free for members. You can download all 6 episodes to your Library
Ep. 1: Underneath Diamond Town
One of the biggest diamond robberies in history, a massive haul of diamonds and jewels from an “impregnable” vault in the world’s diamond capital – Antwerp, Belgium. How did they get in - and out - without raising any alarm, and what was the almost impossibly lucky break that led the diamond detectives to crack the case?
Ep. 2: You Gotta Have Balls
The United California Bank of 1972 was the largest bank burglary in American history. A classic game of cat-and-mouse between the mastermind who planned it all and the FBI agents who want to put him away.
Ep. 3: The Transylvania University Book Heist
A rare book heist at Transylvania University, Kentucky. We hear from the victim, the detective, and one of the robbers - a student who got in too deep.
Ep. 4: All the Money in Stockholm
In 2009, a gang of criminals steal a helicopter and make a dramatic landing on the roof of cash depository in Stockholm. This daring Hollywood-style heist is the most audacious smash-and-grab robbery in Swedish history.
Ep. 5: The $150 Million Dollar Fax
How a gang of thieves stole $150 million from an Australian government fund without ever stepping foot inside a bank.
Ep. 6: How Do You Plan a Heist?
Series creator Alexis Conran joins Michael to take us on a journey through some of the social and security implications that the stories in this series have thrown up.
Please note: The opinions expressed in this episode by Jarret Lafleur are those of the individual and not the U.S. government.
Well, I like reading about fictional heists, robberies and cons and I've enjoyed watching Michael Caine in a fair few films over the years, so why not listen to the old boy discussing a few famous robberies from the past?
There's worse ways of spending nearly 5 hours of otherwise dead time than listening to cops, robbers and witnesses chipping in their recollections of these five heists. Caine joins up the segments with commentary, outlining the "job" under discussion.
For the most part the episodes were interesting with the exception of the final one which was an expert giving his take on the criminal psychology of potential robbers and how they have to think like security experts to thwart them. And vice versa. He muses that in modern times most crime is probably committed digitally online by hacking and identity theft as opposed to firearms, swags of loot and getaway drivers. In truth the final episode was a bit boring and seemed like filler. Maybe the series creator/producer has OCD and an aversion to odd numbers. I know I do.
Of the five robberies I had only heard of the Transylvania Book Heist and that was only because I recently saw a film based on the same event - American Animals with Evan Peters.
I think overall I was left a bit disappointed by the series. The amount of time given over to each job was less than an hour and it seemed more a series of rapid brush strokes than any forensic detail regarding the jobs.
I was amused by the protestations of the 1972 villain who supposedly nicked some of Tricky Dicky's hidden dirty re-elections funds. Nearly 50 years on, he reckons he was fitted up by the FBI who planted evidence to ensure his imprisonment. They broke the sacred oath they swore to uphold the Constitution. Whereas him, a career criminal swore no such oath. Obviously the retired agent maintains he didn't.
I suppose what was revealing was that for all the planning and preparation and the skill and nerve the criminals displayed. Silly mistakes or plain misfortune tripped them up ....... dumping rubbish on the one bit of deserted land for miles that was attended to; not using a burner phone; not starting a dishwasher; three letters on a fax.
Overall - an ok listen. I had hoped for something a bit more revealing.
3 from 5
Read - (listened to) August, 2021
Published - 2020
Page count - xxx (4 hrs 33 mins)
Source - Audible purchase
Format - Audible
Posted by col2910 at 05:18