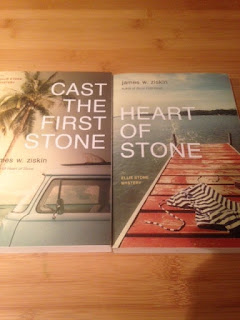 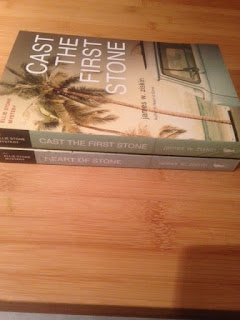 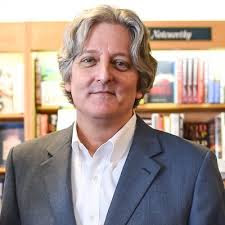 I read the first in the series - Styx & Stone back in October, 2013 and enjoyed it, but rather inexplicably haven't returned to the series for any further outings. I do like a reporter investigating and I like the era depicted. Well I was born in the 60s, so what's not to like about them?

These two are the fourth and fifth in the series, following on from No Stone Unturned (2014) and
Stone Cold Dead (2015).

The author and his books are very well-regarded and according to Google Books have been nominated for and won a few awards....

Winner of the Anthony award for Best Paperback Original and the Macavity Award for Best Historical Novel (Sue Feder Memorial), he has also been a finalist for the Edgar(R), Barry, and Lefty Awards. 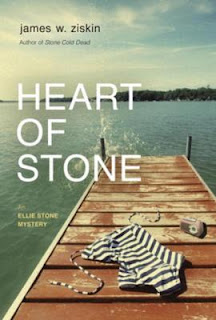 In the waning days of a lazy August holiday, Ellie Stone is enjoying a bright Adirondack-lake morning. Nearby, two men plummet to their deaths on the rocks below, just a few feet short of the water of a dangerous diving pool. A tragic accident, it seems. But the state police quickly establish that the two victims--one, a stranger to the lake and, the other, a teenaged boy from a nearby music camp--surely didn't know each other. That anomaly is strange enough, but what really perplexes Ellie is the out-of-place station wagon parked twenty yards from the edge of the cliff.

Wading into a slippery morass of fellow travelers, free-love intellectuals, rabid John Birchers, and charismatic evangelicals, Ellie must navigate old grudges and Cold War passions, lost ideals and betrayed loves. She sticks her nose where it's unwanted, rattling nerves and putting herself in jeopardy. But this time, it's her heart that's at risk. 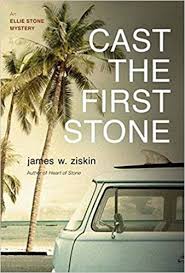 February 1962: CAST THE FIRST STONE Tony Eberle has just scored his first role in a Hollywood movie, and the publisher of his hometown newspaper in upstate New York wants a profile of the local boy who's made good. Reporter Ellie Stone is dispatched to Los Angeles for the story. But when she arrives on set to meet her subject, Tony has vanished. His agent is stumped, the director is apoplectic, and the producer is dead. Murdered.

Ellie is on the story, diving headfirst into a treacherous demimonde of Hollywood wannabes, beautiful young men, desperately ambitious ingenues, panderers, and pornography hobbyists. Then there are some real movie stars with reputations to protect. To find the killer, Ellie must separate the lies from the truth, unearthing secrets no one wants revealed along the way. But before she can solve Bertram Wallis's murder, she must locate Tony Eberle.
Posted by col2910 at 00:46