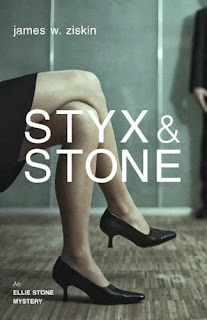 Ellie Stone is a professed modern girl in 1960s' New York City, playing by her own rules and breaking boundaries while searching for a killer among the renowned scholars in Columbia University's Italian Department.

"If you were a man, you'd make a good detective."

Ellie is sure that Sgt. McKeever meant that as a compliment, but that identity-a girl wanting to do a man's job-has throttled her for too long. It's 1960, and Ellie doesn't want to blaze any trails for women; she just wants to be a reporter, one who doesn't need to swat hands off her behind at every turn.

Adrift in her career, Ellie is back in New York City after receiving news that her estranged father, a renowned Dante scholar and distinguished professor, is near death after a savage bludgeoning in his home. The police suspect a routine burglary, but Ellie has her doubts. When a second attempt is made on her father's life, in the form of an "accident" in the hospital's ICU, Ellie's suspicions are confirmed.

Then another professor turns up dead, and Ellie's investigation turns to her father's university colleagues, their ambitions, jealousies, and secret lives. Ellie embarks on a thorny journey of discovery and reconciliation, as she pursues an investigation that offers her both a chance at redemption in her father's eyes, and the risk of losing him forever.

Another new author, another debut book and another interesting mystery set in 60’s New York; this time in the world of academia – which was another first for me.  Who would have thought that university politics and the petty back-biting and jostling would have proved such an interesting back-drop for this satisfying read?

I will be honest; it started brightly for me, then dipped a wee bit for maybe a chapter or two, then kicked back in with the introduction of a character whose story was incredibly sad. This turn of events seemed to offer the reader and Ellie answers as to the identity of our attacker/murderer, but with a chunk of the book still to read.....maybe yes/maybe no.

Ellie, herself was interesting – liberated, intelligent, impulsive, smart, independent and lonely.  Some of the supporting cast of university scholars were by turns....loathsome, irritating, self-centred, aloof, condescending, cold, bitter, angry and devious, whilst others exhibited more compassionate characteristics. (The same as any work-place anywhere, I imagine.) Our policeman was kind, helpful and sympathetic, though I feared his soft exterior might have been a handicap in his role as a detective in 60’s New York.

Would I like to read more by the author? Yes

Would I like to read more about Ellie Stone? Yes, though in a different setting.

Would I recommend this to others? Yes, though in truth I don’t feel it would appeal to everyone. The events unfold over a period of just over a week and there’s a natural logical progression towards the conclusion. No hard pace, no fast action – just an interesting well-written and satisfying mystery, with an atmospheric setting.

A little bit different to my usual reading fare, but I’ll give it a 4 from 5.

Thanks again to Meghan at Prometheus/Seventh Street Books for my copy.