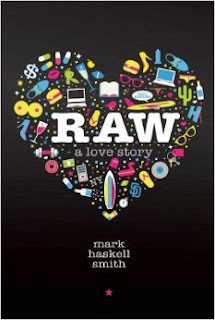 Reality TV hunk and People magazine's "sexiest man alive", Sepp Gregory goes on a book tour to promote his debut novel, a thinly veiled autobiography. Not that Sepp has actually read the book, he doesn't have to, he lived it! The book becomes a sensation, a New York Times bestseller, and, surprisingly, it even gets rave reviews from serious critics. Aside from Harriet Post, that is.

One of the blogosphere's most respected critics, Harriet hears the host of her favorite, high-brow, radio show gush about Sepp's abdominal muscles on-air and fears the end of civilization is upon us. She takes matters into her own hands and sets off to reveal the truth behind the bestseller and to show Sepp as the buff fraud he really is. But then Harriet reads Totally Reality, Sepp's novel, and it's totally great. Now she needs to find Sepp's ghostwriter and find out why he's wasting his talent.
She finds him, appropriately enough, at the Playboy Mansion, where he's supposed to be interviewing Sepp's former television love Roxy Sandoval for his next, highly lucrative, project.

Reality and “reality"  collide, and a tragic accident sends Sepp and Harriet off on a sex-fuelled roadtrip through the southwest. The mind meets the body, and both will be changed forever. Raw: A Love Story is Mark Haskell Smith at his best, dangerously sexy and wickedly funny.

This was another book accessed via the useful Net Galley website.

Raw is the author’s fifth book. I read his debut novel Moist some years ago. Moist was tag-lined as....... a comic rampage through the polyglot gutters of modern Los Angeles. Moist revolved around a tattooed severed arm, Mexican mobsters, LAPD’s finest, a cannabis aficianado, a masturbation coach (yes, really) and minimum wage Bob, in a hilarious stew of murder, sex and mobster-style politics. My kind of book really. Two of his following three books made it onto my piles of unread – Delicious and Salty, but alas Baked has thus far eluded me, as Smith kind of slid off my reading radar.

So after a gap of maybe 6 or 7 years, I was eager to see how Smith’s latest panned out for me.  Raw wouldn’t qualify as one of my typical noir or hard-boiled crime reads but was a comedic, satirical poke at celebrity and publishing.  Absolutely hilarious in places, on several occasions I was laughing like a drain. Smith paints his likeable characters into situations that are absurd but at the same time believable.

We follow Abs-man, hot-reality star, Sepp Gregory on his successful book tour around the US. Sepp, amiable and easy-going is promoting the book he never wrote, whilst embarrassingly suffering erectile dysfunction as a consequence of the public break-up with super-hot, super-fake reality co-star, Roxy. All the women throwing themselves at Sepp and his equipment isn’t working!

We meet, Curtis his ghost-writer. Curtis, an un-published novelist in his own right, is miffed and angered at the plaudits being showered on Sepp for “HIS” best-seller. He’s conflicted, does he take the big bucks on offer for his next project – Roxy’s Magnum Opus shot at the New York Times Best-seller list, or does he try for some literary recognition for himself? That’s an awfully big cheque they’re waving at him.

We meet Harriet, serious book-blogger and critic, an unsuccessful, published novelist. Harriet has her own anger issues; the rise of the celebrity ghost-written novel endangers the whole of western civilisation as she knows it. If she doesn’t expose the charade, her and all legions of aspiring serious, novelists will have to look forward to is a future flipping burgers.

Lastly, we meet Roxy and her plastic breasts, back to exact more revenge and heap further humiliation on Sepp, whilst Curtis interviews her before penning “HER” shot at the best- seller market.

Fast and fun, our combatants collide at Hugh Hefner’s Playboy mansion.  Sepp with his parts back in working order ends up on another Reality-road trip with the unlikeliest of companions.

Verdict – savagely funny and satisfying with characters you care about. It’s probably time to dust off the other Mark Haskell Smith books on the pile.

I accessed this via the Net Galley website. I believe the novel is released in late December. Highly recommended.
Posted by col2910 at 04:09